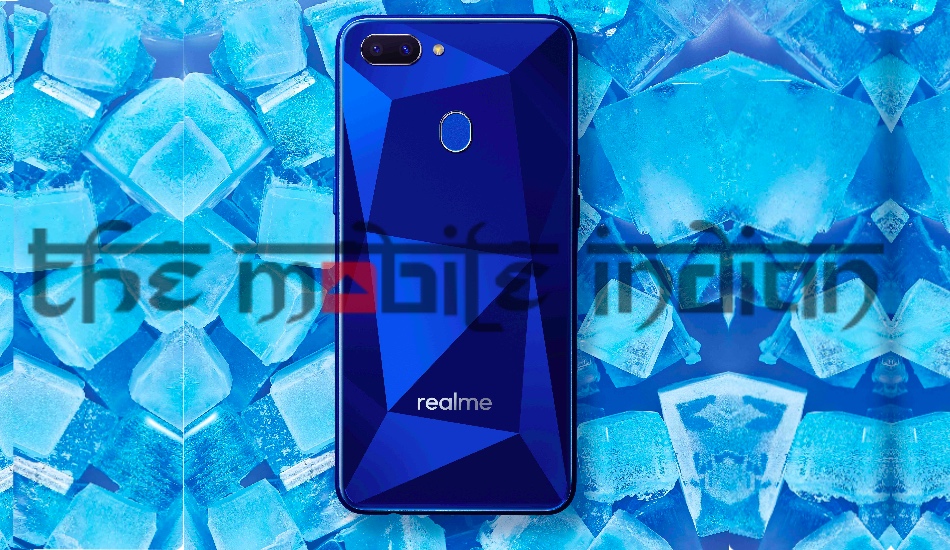 The first thing you will notice about the image is the diamond-like finish at the back panel. This is the same finish, which was present in Realme 1. There is a fingerprint sensor, which is situated at the top-centre position of the back panel.

Realme is all set to introduce its first smartphone with a dual camera and notched display, the Realme 2, in India on August 28. Now, just ahead of launch, we have obtained a picture of the upcoming smartphone.

The image we are talking here shows the back panel of the upcoming smartphone. It shows Diamond Blue colour option, while it will also be available in Diamond Black and Diamond Red paint jobs.

The first thing you will notice about the image is the diamond-like finish at the back panel. This is the same finish, which was present in Realme 1. Further, there is a dual-camera setup at the back panel, which outlined with a silver ring around the camera module. This is accompanied by a single tone LED flash.

There is a fingerprint sensor, which is situated at the top-centre position of the back panel. The sensor also has a silver ring around it, which gives a pretty premium feel. That said, the power on/off button is placed on the left, while the volume rockers are situated at the right side. We already know that the phone will come with a notched display and the company has revealed that it will feature a 6.2-inch display, which might bear a Full HD+ resolution.

We just reported that the phone would be available in three memory configurations out of which one will cater the budget-centric segment. This could also mean that the base model will be priced below Rs 10,000. Madhav Sheth, Chief Executive Officer, Realme India,earlier told The Mobile Indianthat thebrand is looking to cater the affordable smartphone segment as the brand wants to cater to the aam aadmi (common man).