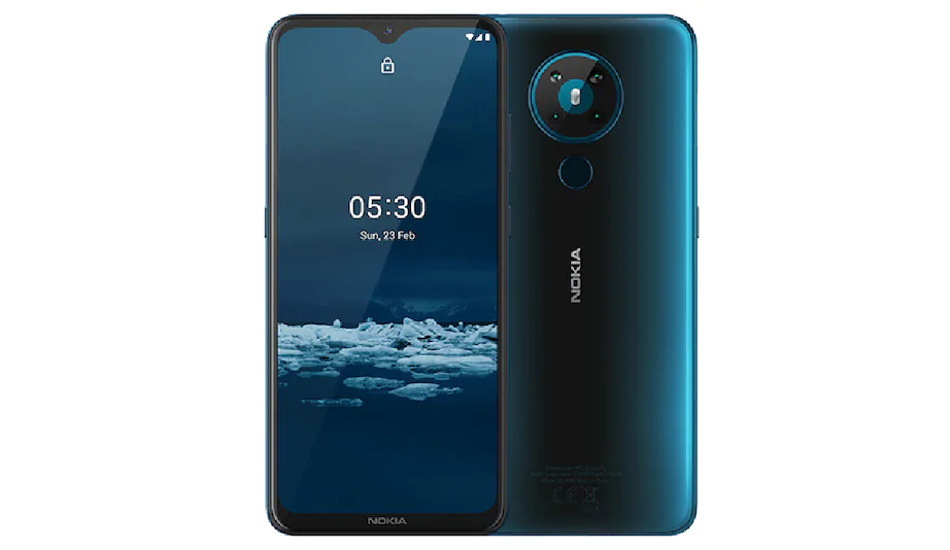 Nokia will also be launching a couple of other smartphones as well.

The Nokia 5.3 is loaded with a 6.55-inch HD+ display with a resolution of 1600 x 720 pixels along with 2.5D curved glass. The smartphone is powered by a Qualcomm Snapdragon 665 processor along with Adreno 610 GPU. It is backed by up to 6GB RAM and 64GB of internal storage, which can be further expanded up to 512GB via microSD card. It has a rear-mounted fingerprint scanner and packs a 4000mAh battery that promises 2-day battery life. The phone runs Android 10.

The Nokia 5.3 is loaded with a quad-camera setup with a combination of 13-megapixel primary lens with f/1.8 aperture, a 5-megapixel wide-angle lens, a 2-megapixel depth sensor and a 2-megapixel macro shooter. For the front, there is an 8-megapixel selfie shooter.

It is likely that Nokia might announce the Nokia 8.3 along with Nokia 5.3. The Nokia 8.3 5G is the first smartphone from HMD Global that comes with 5G support.

It comes with a 6.81-inch Full HD+ display with 120Hz refresh rate, 2400 x 1080 pixel resolution and 20:9 aspect ratio. The smartphone is powered by an octa-core Qualcomm Snapdragon 765 processor along with up to 8GB of RAM and up to 128GB of internal storage.

Recently, Nokia C3 entry-level smartphone with Android 10 was announced at 699 Yuan (approx. Rs 7,530) and it is available in two colour options including Nordic Blue and Gold Sand.

The Nokia C3 is loaded with a 5.99-inch HD+ display with a screen resolution of 1440 x 720 pixels. The smartphone is powered by a 1.6GHz octa-core Unisoc SC9863A processor along with IMG8322 GPU. The phone is loaded with 3GB of RAM and 32GB of internal storage. It is loaded with an 8-megapixel rear camera with f/2.0 aperture and LED flash. For the front, there is a 5-megapixel shooter with f/2.4 aperture. The Nokia C3 runs on Android 10 operating system and it comes with 3040mAh battery.