Asus has announced a new range of ROG laptops in India. 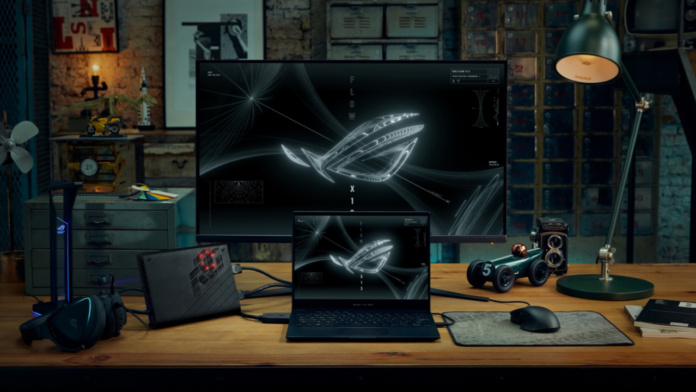 ASUS ROG Flow X16 is a 16-inch slim device with XG Mobile compatibility that fits in an ucompact 15-inch chassis. It comes with up to an AMD Ryzen 9 6900HS coupled with up to an NVIDIA GeForce RTX 3070Ti Laptop GPU. Built on NVIDIA’s Ampere architecture, the latest GPU options combine new streaming multiprocessors with enhanced RT and Tensor cores to provide realism with Ray-Traced graphics. The machine equips a tri fan setup called the Frost Force cooling system. It is combined with Pulsar Heatsink, which redirects the airflow towards the GPU.

The machine has Nebula HDR Display which is powered by AmLED technology from AUO and ROG’s own in-house backlight algorithm. This adaptive control technology utilizes image processing as well as dynamic dimming and boosting to create hyper-accurate local dimming with 512 local dimming zones.

It comes with Windows 11 Home and has a 13” 1.3kg chassis. The machine comes with up to the latest Ryzen 9 6900HS CPU and GeForce RTX 3050 Ti GPU. Optional XG Mobile eGPU boosts graphics on demand with up to an AMD Radeon RX 6850M XT. Users get a choice of 4K UHD or 120Hz FHD display option. The X13 has a 360-degree hinge and a multitude of different viewing configurations. The display is touch-enabled as well and outfitted with scratch-resistant Corning Gorilla Glass for added durability.

The XG Mobile eGPU uses an exclusive PCIe Gen 3 X8 lane interface that delivers 7.88GB/s of dedicated bandwidth to the GPU, and a dedicated USB link for driving the I/O hub. The side-mounted power button has an integrated fingerprint sensor, allowing you to login 3x faster and more securely than a password.

The second 14.1” touchscreen display of Zephyrus Duo 16 supports resolutions of up to 4K and is equipped with up to an AMD Ryzen 9 6900HX CPU and up to NVIDIA RTX 3080Ti series GPUs with MUX Switch. It has low boot times with 2 TB PCIe Gen 4 X4 SSD and 32GB of Dual Channel DDR5 4800MHz RAM. To cool all the hardware, there’s ROG Intelligent Cooling system with 84-blade Arc Flow fans and Conductonaut Extreme liquid metal compound on the CPU for up to 15° lower temperatures compared to the traditional thermal paste. The

An IR camera with Windows Hello support enables logging into Windows quickly. There’s a 1.7mm travel distance keyboard. Furthermore, a Type-C port on the right edge of the Duo 16 will be USB4 capable with a software update that’s expected to enable the capability later this year.

Read More: Asus Zenfone 9 in leaked press renders ahead of launch on July 28

The Zephyrus G14 comes with up to AMD Radeon RX 6800S and Up to the latest Ryzen 9 6900HS Processor with Radeon Graphics. The Zephyrus G14 now features a 16:10 aspect ratio to accommodate more content on users’ screens. It’s slim 4.7mm side bezels and a 91% screen-to-body ratio provide users with am immersive gaming and visual experience.

The improved thermal design allows the new G14 to get additional thermal headroom and achieve up to 105W of total graphics power (with AMD SmartShift Max technology). Similarly, the added MUX switch provides additional gaming performance ranging from 5% to 10% on average or even above 40% in selected eSports titles. The panel has gone through a major update as well and now fulfills all the requirements to be labeled as ROG Nebula Display.

Now featuring a 16:10 aspect ratio, the panel is not only brighter with up to 500nits, but also features response times as low as 3ms. It is equipped with Dolby Vision, 100% DCI-P3 color coverage with Pantone Validation for color accuracy.

The Zephyrus G15 is equipped with up to an AMD Ryzen 9 6900HS laptop processor. With 8 cores and 16 threads, it is paired with the top-of-the-line up to an NVIDIA GeForce RTX 3080 graphics card. In addition, the new model is configurable with up to 16 GB of DDR5 RAM– 4800 MHz (expandable to 48GB). The Zephyrus G15 is configurable with either a 240Hz or 165 Hz QHD panel which has Adaptive-Sync technology and 100% DCI- P3 color gamut coverage. The asymmetrical dot matrix design on the lid is made with a precision CNC milling process that creates 8279 spaced perforations across an compact surface area.