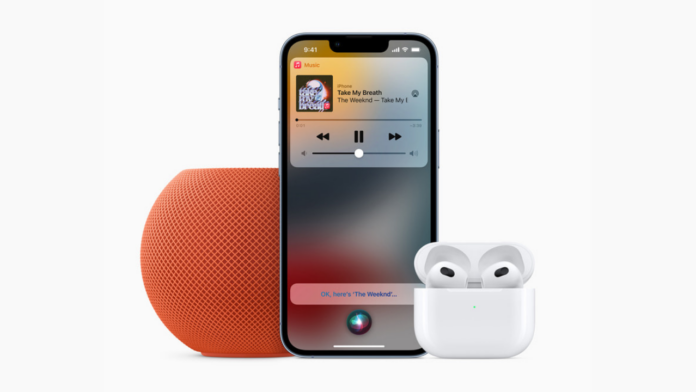 Apple unveiled its new MacBook Pros at its ‘Unleashed’ event held last night. Along with that, the brand also launched the new AirPods 3, a new Apple Music Voice Plan and new colours for its HomePod Mini smart speaker.

By combining the power of the H1 chip with an Apple-designed acoustic system, the new AirPods use computational audio to deliver sound with Adaptive EQ. AirPods 3rd Generation are available to order starting today, and in stores beginning Tuesday, October 26. They are priced at Rs 18,500 in India. AirPods (2nd generation) will be available at the new price of Rs 12,900. AirPods Pro now come with MagSafe Charging Case for the same price of Rs 24,900.

Finally, the new Apple Music Voice Plan for Rs 49 per month will be available later this fall in select countries and regions, including India.

The AirPods 3 have a new design. For a more subtle appearance, the stem is shorter than the previous generation and features the same intuitive force sensor as AirPods Pro for media control. The new AirPods are resistant to both sweat and water, with an IPX4 rating for both the earbuds and the charging case.

The microphone is covered by an acoustic mesh to help reduce the sound of wind, so the speaker’s voice comes across distinctly on calls. AirPods also feature AAC-ELD, a speech codec that offers full HD voice quality, providing clear, natural communication for FaceTime calls.

For an optimal listening experience, the new AirPods 3 feature Adaptive EQ that tunes sound in real time based on how AirPods fit in the user’s ear. An inward-facing microphone monitors for sound, and then Adaptive EQ, powered by computational audio, tunes the low and mid frequencies to account for what may be lost due to variances in fit. Spatial audio creates a three-dimensional theatre-like experience, placing sound virtually anywhere in space with support for Dolby Atmos.

A new skin-detect sensor accurately discerns if AirPods are in the ear versus in a pocket or on a table and pauses playback when removed. To help with sound clarity, beam-forming microphones block out ambient noise and focus on the user’s voice. Users can also enjoy a hands-free experience by simply saying “Hey Siri” for requests.

AirPods (3rd generation) offer an extra hour of battery life over the previous generations, with up to six hours of listening time and up to four hours of talk time. Just five minutes of charging provides about an hour of battery life, and with four additional charges in the case, users can get up to 30 hours of total listening time. AirPods 3 are now also part of the MagSafe ecosystem for convenient wireless charging. Apple also says that new subscribers can get Apple Music free for six months with the purchase of any AirPods, AirPods Pro, or AirPods Max.

The Apple Music Voice Plan offers subscribers access to the service’s catalog of 90 million songs; tens of thousands of playlists, including hundreds of brand new mood and activity playlists, personalised mixes, and genre stations, all through Siri for just Rs 49 per month.

Apple Music Voice Plan subscribers will get a customised in-app experience with suggestions based on the listener’s music preferences and a queue of recently played music through Siri. Within the app there will also be a dedicated section called “Just Ask Siri” where subscribers can learn tips to optimise Siri for Apple Music.

Apple introduced three new colours for the HomePod mini including yellow, orange, and blue. HomePod mini uses computational audio to provide a detailed acoustic experience and deliver peak performance. To achieve big sound out of such a compact design, the Apple S5 chip runs advanced software to analyse the characteristics of the music.

It also applies complex tuning models to optimise loudness, adjust the dynamic range, and control the movement of the driver and passive radiators, all in real time. HomePod mini’s full-range driver, premium neodymium magnet, and pair of force-cancelling passive radiators enable it to produce deep bass and crisp high frequencies.