The new MacBook Pro has been launched in 14-inch and 16-inch sizes. These are powered by the M1 Max and the M1 Pro chips. 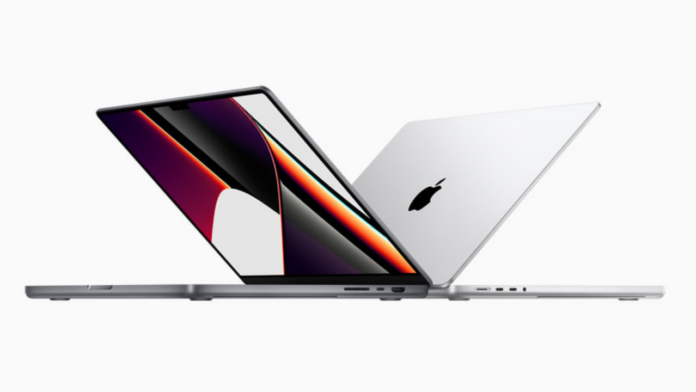 At its ‘Unleashed’ event last night, Apple unveiled the all-new MacBook Pro, powered by the latest M1 Pro and M1 Max — the first pro chips designed for the Mac. The new MacBook Pro is available in 14- and 16-inch sizes. This model also features a Liquid Retina XDR display.

Apple further notes that macOS Monterey, the newest version of macOS will be available as a free software update on Monday, October 25.

Talking about the new chips first, the M1 Pro features up-to-10-core CPU with eight high-performance cores and two high-efficiency cores. It is coupled with an up-to-16-core GPU because of which the M1 Pro delivers up to 70 percent faster CPU performance than M1, and up to 2x faster GPU performance. M1 Pro also delivers up to 200GB/s of memory bandwidth — nearly 3x the bandwidth of M1 — and supports up to 32GB of fast unified memory. M1 Pro adds a ProRes accelerator in the media engine, delivering fast and power-efficient video processing.

The M1 Max is the more powerful chip out of the two. The M1 Max features the same powerful 10-core CPU as M1 Pro, and doubles the GPU with up to a massive 32 cores for up to 4x faster GPU performance than M1. It also has up to 400GB/s of memory bandwidth — 2x that of M1 Pro and nearly 6x that of M1 — and up to 64GB of fast unified memory.

M1 Max also offers an enhanced media engine that features two ProRes accelerators for even higher multi-stream performance. As a result, pros can edit up to 30 streams of 4K ProRes video or up to seven streams of 8K ProRes video in Final Cut Pro — more streams than on a 28-core Mac Pro with Afterburner. And for the first time on any Mac, video editors can grade colour in HDR on 8K ProRes 4444 video on battery when they’re miles away from the edit bay.

Apple has provided some bold claims while comparing its new MacBook Pro with the older generation model. With the 10-core CPU in M1 Pro and M1 Max, the 14-inch MacBook Pro enables:

With the 16-core Neural Engine on both M1 Pro and M1 Max, ML tasks are faster on the 16-inch MacBook Pro, including:

When compared to the previous-generation MacBook Pro on a single charge:

The new MacBook Pro also comes with a Magic Keyboard that is set in a double-anodised black well. It highlights the backlit glyphs on the keys, and features a full-height function row. Physical function keys including a wider escape key — replace the Touch Bar, bringing back the familiar, tactile feel of mechanical keys. There’s a force touch trackpad as well.

MacBook Pro now offers a Liquid Retina XDR display. Featuring the mini-LED technology used in iPad Pro, the Liquid Retina XDR display delivers up to 1,000 nits of sustained, full-screen brightness. You get 1,600 nits of peak brightness, and a 1,000,000:1 contrast ratio. Further, the display supports HDR, P3 wide colour gamut, and ProMotion 120Hz. The 16-inch model has a 16.2-inch display while the 14-inch model has a 14.2-inch panel.

Both models feature three Thunderbolt 4 ports to connect high-speed peripherals, an SDXC card slot for access to media, an HDMI port for connecting to displays and TVs, and an improved headphone jack that supports high-impedance headphones. MagSafe also returns to MacBook Pro with MagSafe 3, featuring an updated design and supporting more power into the system than before.

MagSafe 3 makes connecting a charge cable quick and easy while protecting MacBook Pro. Additionally, fast charge comes to the Mac for the first time, charging up to 50 percent in just 30 minutes. With M1 Pro, users can now connect up to two Pro Display XDRs, and with M1 Max, users can connect up to three Pro Display XDRs and a 4K TV, all at the same time. For wireless connectivity, MacBook Pro also features Wi-Fi 6 and Bluetooth 5.0.

This model comes with a 1080p FaceTime HD camera, and a high-fidelity six-speaker sound system. This sound system features two tweeters for a clearer soundstage and four force-cancelling woofers.

Coming later this fall, SharePlay will enable Mac users to have shared experiences together through FaceTime, and Universal Control will make it easy for users to work effortlessly across their Mac and iPad. With macOS Monterey and Apple silicon, Mac users can run a greater range of apps than before. All of Apple’s Mac apps are optimised for and run natively on M1 Pro and M1 Max, and there are over 10,000 Universal apps and plug-ins available, including Lightroom Classic, Cinema 4D, Capture One, and many more.

Existing Mac apps that have not yet been updated to Universal will run seamlessly with Apple’s Rosetta 2 technology, and users can also run iPhone and iPad apps directly on the Mac. Powerful new features also come to Final Cut Pro and Logic Pro, allowing creatives to take full advantage of the power and performance of M1 Pro and M1 Max.