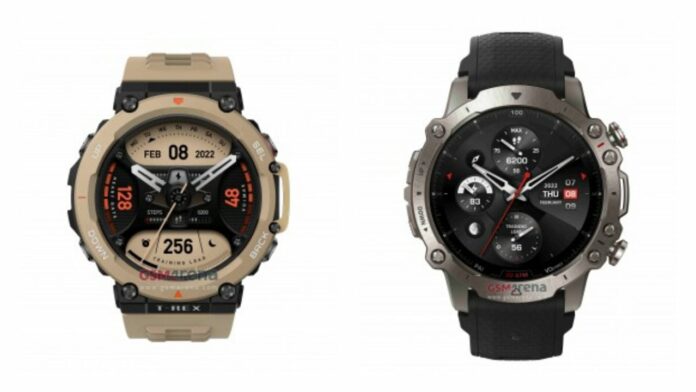 Amazfit will soon launch T-Rex Pro 2 and Amazfit Vienna smartwatches soon. The images and specs of both the watches have now leaked out.

The Amazfit Vienna smartwatch will be a premium rugged watch from the brand with features like titanium unibody casing and sapphire glass screen.

The smartwatch will come in various colour options including Classic Black, Astro Black, Gold, Wild Green, and Desert Khaki. As per the report, the watch will come with a 1.39-inch AMOLED display with a 454×454 pixels resolution and 1,000 nits peak brightness.

Further, it will have 15 regulations of military standard (MIL-STD-810). The watch has 10 ATM water resistant design. There will be an upgraded BioTracker 3.0 PPG to monitor the heart rate and blood oxygen. It is said to pack a 500mAh battery with a life for up to 24 days of mixed usage as well as 10 days of high usage.

Users will be have over 150+ sports modes, along with sleep and stress levels, with PAI scores. The watch will have 32MB RAM and 512MB onboard storage. The watch also boasts an accelerometer, gyroscope, barometer, geomagnetic sensor and an ambient light sensor. It will also come with dual-band GPS and Bluetooth 5.0 for connectivity.

Both new Amazfit watches are expected to launch this summer.

The smartwatch will sport a 1.28-inch round AMOLED display with 416×416 pixel resolution and 1000nits peak brightness. It will feature a titanium and sapphire glass build.

Amazfit Vienna will have a waterproof rating of 20ATM. There will be a 500mAh battery capable of lasting up to 14 days on a single charge. Lastly, it will also feature dual-band GPS and Bluetooth 5.0 for connectivity.