The company has revised the plan by providing more data to its customers.

Bharti Airtel has once again revised its prepaid plan of Rs 149 and thistime around it is offering more data. The company is now offering 1GB of 4G data per day as against 1GB of data for 28 days earlier.

After the new development, users will get 28GB of 4G data which can be consumed in 28 days. Apart from this, consumers will get unlimited local and STD calls along with 100 SMSes. However, Airtel has put a daily cap of 250 minutes and a weekly cap of 1000 minutes. Additionally, outgoing and incoming is free on national roaming. 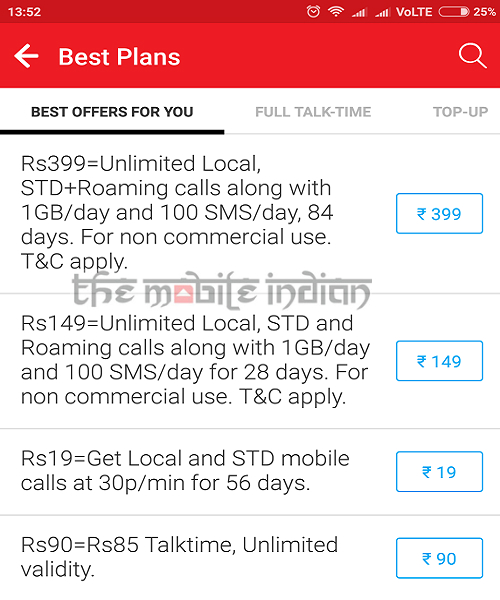 The new pack is visible on the Airtel website or My Airtel app for select users in telecom circles including Delhi, Karnataka, and Andhra Pradesh & Telangana.

Earlier also Airtel revised Rs 149 pack by offering unlimited calling. Earlier, the same pack used to offer unlimited Airtel to Airtel calls, but then the company revised the calling benefits. Customers got unlimited calling on both local and STD on any network with free outgoing roaming calls.

Earlier, the company also revised its prepaid plan of Rs 399. The company is now offering the validity of 84 days, which was earlier for 70 days. Rs 399 pack now offer users 84GB of 4G data, which makes it 1GB data per day along with the unlimited local and STD and 100 SMS/day.