The tablet has been spotted on GFXBench benchmarking website.

Seems like Lenovo is set to bring a new 9.4-inch Android tablet in the market. An unannounced tablet from Lenovo which goes by the name Lenovo TB-8504F/N has been spotted on GFXBench benchmarking website which now reveals few of its specifications.

As per the listing on GFXBench, Lenovo TB-8504F/N has a 9.4-inch HD display with 1280×800 pixels resolution and 5 finger gesture support. It is powered by Qualcomm Snapdragon 425 (Cortex A53) Quad-Core 1.4 GHz processor coupled with Adreno 308 and 2GB RAM. It offers 16GB of internal storage out of which 10GB will be reserved for the users and rest being taken up by the OS which is expected to be Android Nougat. 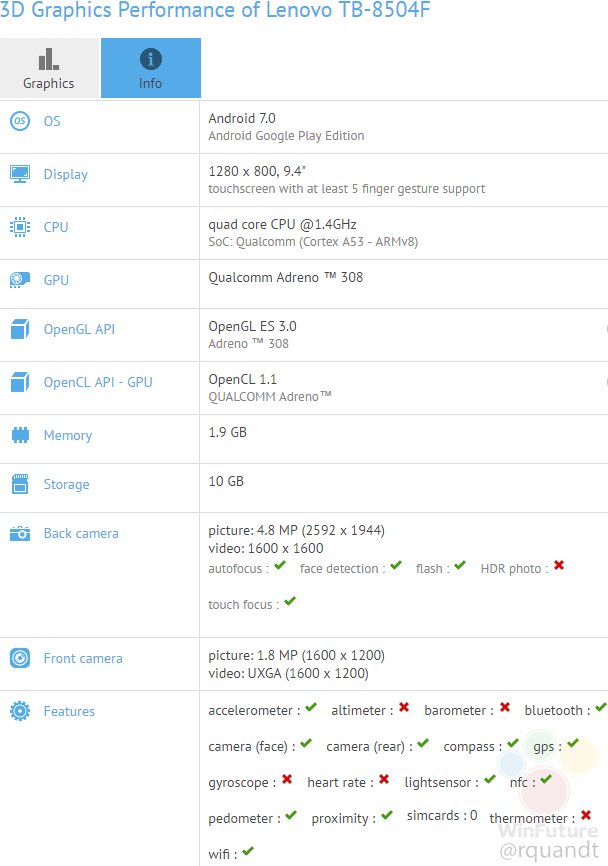 Moreover, Lenovo TB-8504F/N has a 5-megapixel autofocus camera and a LED flash on its rear panel while a 2-megapixel camera in its front as well. The GFX listing shows that the device has connectivity features like Bluetooth, GPS, NFC and WiFi. As per the listing, the device has an accelerometer, light sensor, and proximity sensor as well.

Recently, Lenovo Tab3 8 Plus tablet with model number ‘TB-8703F’ was spotted on Geekbench website. Later, a couple of images of an A-series smartphone leaked on Weibo which is expected to be unveiled at the upcoming Mobile World Congress 2017 to be held in Barcelona from 27th February to 2nd March 2017. Apart from that, the new leaked tablet ‘TB-8504F/N’ might also be unveiled at the upcoming MWC.