Here are top 5 reasons to buy Realme Pad which is the latest entrant in the entry-level tablet segment in India. 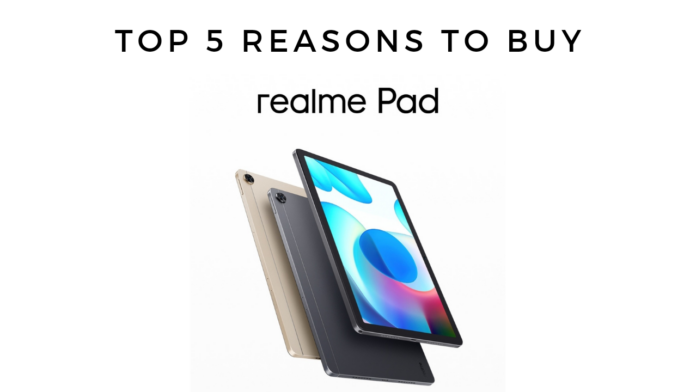 Tablets are made for multimedia consumption and gaming. While iPads have been ruling the Tablet space for a while now followed by Samsung tablets, companies like Realme and Xiaomi are trying to make a name for themselves in the segment. As a result, Realme launched its Realme Pad in India recently that comes with some decent specs for an entry-level tablet that can be used to watch movies and videos and lot more. To define this ‘lot more’, let’s take a look at the top 5 reasons to buy the Realme Pad:

The Realme Pad sports a 10.4-inch display with a resolution of 2000 x 1200 pixels which is high enough for a display this big. With a display this big, watching shows, movies and YouTube videos could be more fun than watching them on a traditional smartphone display.

Gaming could also look great as you get a wider viewing area with more interactive elements visible to you on screen. The quality of the display will have to be seen once the reviews of the device are out and once it ships to the customers.

The Galaxy Tab A7 Lite which costs similar to the Realme Pad has an Inferior display with the same resolution but a much smaller size. The Galaxy Tab A7 which is almost an year old has a similar display and we found it to be decent during our review of the same.

A big battery always helps. A big battery has no downsides except that it charges a bit slower. Realme tries to solve that to some extent with 18W fast charging but that should still take you more than 2 hours to charge it from 0 to 100%.

But a 7100mAh battery could easily last more than a day considering you will use the tablet mainly for media consumption (with breaks). Realme claims that the tablet can last 65 days in standby. It can provide 12 straight hours of video viewing which sounds great for a tablet.

In comparison, one of the main competitors of the Realme Pad is the Galaxy Tab A7 Lite in India which only has a 5100mAh battery. So a longer battery always helps you get more out of the device.

The Galaxy Tab A7 Lite has dual speakers means it misses out on two additional speakers compared to Realme Pad. The vanilla Tab A7 has quad speakers but again, the device is a year old now.

The Realme Pad comes with a total of two cameras out of which one is on the front and ons is on the back. Both of them are 8-megapixel sensors with the front one having a 105-degree field of view. To accompany the cameras, there’s a dual mic noise cancellation setup for clearer and enhanced video calls. The wide-angle sensor on the front helps you capture more and will help you in video calls.

To compare, the Tab A7 Lite has a 2MP sensor while the Tab A7 has a 5MP sensor one. Though these sensors will have to be tested under real life conditions, but as far as on-paper specs are concerned, the one on Realme Pad looks to be the superior one.

The Realme Pad comes with Realme UI for Pad which the company says is specifically made for Realme Pad. It is based on Android 11 and Realme says that the software is made to fulfil entertainment needs. The tablet has a feature called Smart Connect where instead of typing a password, one can use their realme Band/Watch to unlock realme Pad instantly.

Nearby Share allows the user’s phone and tablet to share the files and images immediately, and Open-up Auto Connection connects the user’s earphones to the Pad automatically when they’re close by. Plus, cast screen features can cast content from the user’s Pad to their TV.

Further, the Realme Pad is powered by the MediaTek Helio G80 chipset that is superior to Helio P22T which powers the Galaxy A7 Lite. Also, the G80 chipset can get light tasks done with ease. We can claim this on the basis of our experience of smartphones that come equipped with this processor. However, gaming can be an issue with this one but games such as Clash Of Clans, Subway Surfers should run fine. Resource demanding games such as PUBG Mobile and Call Of Duty should be kept out of expectations.