Tecno Pop 6 Pro has been launched in India as a budget offering with a Helio A22 processor, dual rear cameras and more. 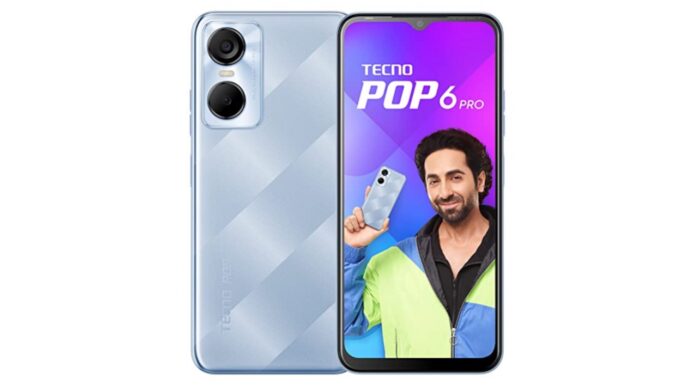 Tecno has launched a new smartphone in India, called the Tecno Pop 6 Pro. The smartphone is powered by the MediaTek Helio A22 SoC and runs on Android 12 Go Edition. It is a budget offering that houses a dual rear camera setup and packs a 5,000mAh battery for longer usage times.

The Tecno Pop 6 Pro costs Rs 7,999 for the sole 2GB+ 32GB trim. The handset is currently on sale at Amazon for Rs 6,099 as a part of the Great Indian Festival sale. The smartphone comes in Peaceful Blue and Power Black colour options.

At the front, it comes with a 5-megapxiel selfie camera with an LED flash. The smartphone also features portrait mode photography. It is backed by a 5,000mAh battery which is claimed to deliver 42 days of standby time.

The Pop 6 Pro is powered by a Helio A22 quad-core processor and comes with 2GB RAM and 32GB of storage onboard which is expandable up to 1TB using a dedicated microSD card slot. It boots HiOS 8.6 based on Android 12 (Go Edition). The 4G smartphone also features a side-mounted fingerprint scanner for biometric authentication.

The Tecno Pop 6 Pro is a budget offering and the budget space is already being dominated by some players. So before considering the Tecno Pop 6 Pro, do check out some of the alternatives mentioned below:

The Realme C30s is powered by an octa-core Unisoc Unisoc SC9863A1 under the hood. The device packs up to 4GB of RAM and up to 64GB of UFS 2.2 storage. Further, there is an 8-megapixel f/2.0 AI camera on the back and a 5-megapixel f/2.2 selfie camera. The device also has a microSD card slot for storage expansion.

Redmi A1 comes at Rs 6,299 and sports a 6.52-inch HD+ display with a waterdrop-style notch. Further, the display has 20:9 aspect ratio display, 400 nits brightness, scratch resistant glass. The phone is powered by the octa-core MediaTek Helio A22 SoC, which is coupled with 2GB LPDDR4X RAM and 32GB eMMC 5.1 storage. It supports expansion using a microSD card (up to 512GB).

For optics, the Redmi A1 has an AI-backed dual rear camera unit. It has an 8-megapixel primary sensor with LED Flash, f/2.0 aperture and depth sensor. For selfies and video chats, the phone features a 5-megapixel selfie camera sensor at the front with f/2.2 aperture.

The Redmi A1 has support for more than 20 Indian languages including Hindi, Tamil, Telugu, Kannada, Malayalam, Bengali and more. The phone packs a 5,000mAh battery with support for 10W charging.

Redmi 9A Sport comes with a 6.53-inch HD+ display with 720×1600 pixels resolution. Further, the display comes with 400 nits brightness and 20:9 aspect ratio. The phone is powered by an octa-core MediaTek Helio G25 SoC, paired with 4GB RAM. In addition, there are 32GB, 64GB, and 128GB of onboard storage options with up to 512GB external storage via a microSD card card slot.

For the camera, the phones are equipped with a single rear camera setup with a 13-megapixel primary sensor with an f/2.2 lens and an LED flash. In addition, the front camera features a 5-megapixel selfie camera sensor on both devices.

The Redmi phone runs on Android 11 with MIUI 12 on top. They pack a 5,000mAh battery with 10W charging support. The phone lacks a fingerprint scanner, but it does feature face unlock technology. Connectivity options include Dual 4G VoLTE, Wi-Fi 802.11 b/g/n, Bluetooth 5, GPS + GLONASS, micro USB and a 3.5mm audio jack. They both come with a P2i coating for splash resistance.

Further, for the camera, the Infinix phone features a single-camera set up at the rear. There is an 8-megapixel primary camera while on the front, there is a 5-megapixel sensor for selfies. The smartphone is backed by a 5,000mAh battery that is rated to deliver up to 31 hours of talk time on a single charge and has standard 10W charging support. In addition, the device also features a side-mounted fingerprint sensor for security. Lastly, the phone runs on XOS 7.6 based on Android 11 Go Edition.

Lava Blaze is currently selling for Rs 7,999 and has a 6.5-inch display, 3GB of RAM, 64 GB of internal storage and is powered by a MediaTek Helio A22 processor. It runs on Android 12. It also has a provision for adding 3GB virtual RAM as well.

On the camera front, this Lava device has a triple rear camera which includes 13-megapixel primary camera and one 2-Megapixel depth camera along with a VGA sensor. On the front, it has an 8-megapixel camera. Lava Blaze has a 5000 mAh battery and comes with a 10W Type-C charger. 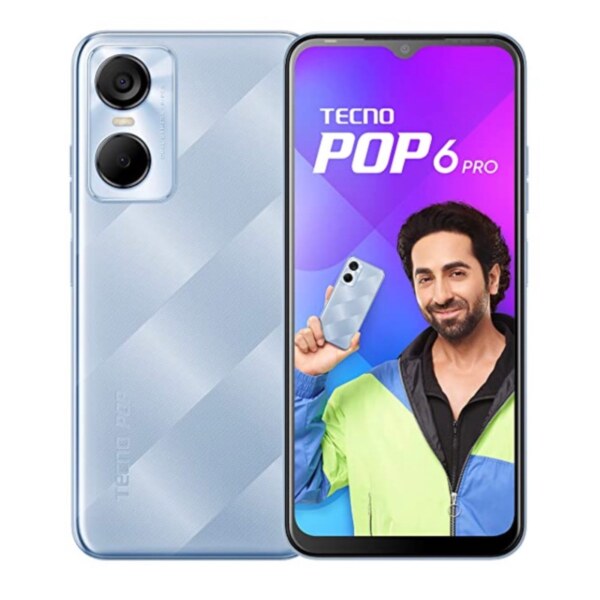