Here's a list of smartphone blasts that took place in 2021. 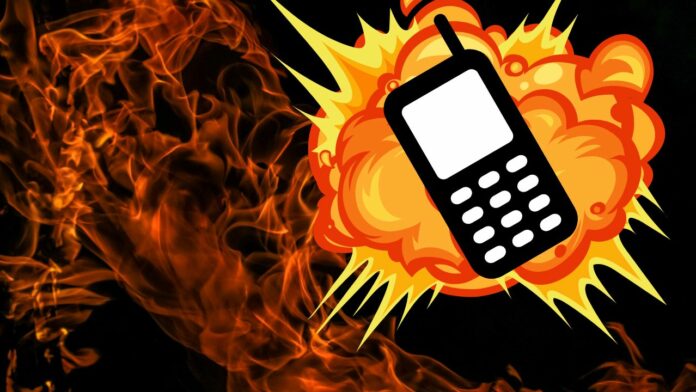 A smartphone helps you do multiple things at once and is available right when you need it. Unfortunately, as useful and convenient as keeping a smartphone in your pocket can be, it can sometimes also pose a threat to the person who owns it. While these smartphones go through multiple tests during the production process, the battery or maybe some other component can always malfunction, causing the smartphone to explode. So today, let’s take a look at some of the major smartphone blasts that took place in the last few years and traumatized or harmed the user:

One of the most recent incidents of a smartphone blast in 2021 involved the OnePlus Nord 2. The smartphone launched back in July last year with a decent set of specifications for a reasonable price. But it seems like one of the units malfunctioned, which caused it to blast.

In August, a user stated on Twitter that his wife’s OnePlus Nord 2 blasted inside her sling bag while she was cycling. The woman bought the new Nord 2 just a few days ago. The victim was said to have met with an accident and is in trauma following the incident. The user Ankur Sharma from Bengaluru also posted images of the damaged unit. The pictures showed the rear panel totally destroyed. The frame, side panel, and display are burned as well.

In response to the situation, OnePlus tweeted, “We are gutted to hear about your experience. We are deeply concerned and want to make it up to you. We request you to connect to us over a direct message so that we can make amends and turn this around for you”. The cause of the explosion was not specified at that time.

A few days later, a second case was spotted regarding the same smartphone getting exploded. Fortunately, the company later clarified that the case was fake and didn’t involve any OnePlus products.

The third case of the blast happened in November. The blast took place in Dhule, India, when the phone was in the right pocket of the user, where it suddenly blasted out of nowhere. Soon after the incident was reported, OnePlus responded with a statement saying, “We take such incidents seriously. Our team has reached out to the user, and we are in the process of collecting the details to investigate this further”. However, the exact reason behind the blast is still a question.

Now OnePlus has issued a refund and is set to pay for the victim’s medical expenses. The company’s operational head is also said to be in contact with the victim for any help or queries. Though, the user who reported the incident has also not shared any updates on the compensation. However, he clarified that OnePlus is in touch with him, and the R&D team is looking into the matter.

The Samsung Galaxy A21 is an entry-level smartphone. It comes with some of the most basic sets of specifications. Unfortunately, the device was reported to have caught fire while on an aeroplane. Brings back memories?

The aeroplane had flown in from New Orleans and had landed at the Seattle-Tacoma International Airport before the passenger’s cellphone burst into flames. The flight crew reportedly tried to contain the smoke using a battery containment bag. However, the smoke inside the cabin led to the forced deployment of the evacuation slides.

An emergency evacuation took place once the plane landed because of excessive smoke. Over 128 passengers and six crew members were transported by bus to the Seattle-Tacoma International Airport handle terminal. The Twitter handle of the said airport of also reported some minor injuries and bruises. The aircraft was towed to a gate and there were no impacts to airport operations.

It is currently unknown what caused the blast. Samsung did issue a statement that an investigation is in process. However, it didn’t confirm whether the exploded smartphone was indeed the Galaxy A21 or not. It is also unclear whether it was a manufacturing defect or was it because of the customer’s mistake.

The Oppo A53 exploded in a customer’s pocket back in June. The smartphone is powered by an octa-core Qualcomm Snapdragon 460 processor coupled with 4GB of RAM and 64GB of internal storage.

The customer, whose name is Jitender, suffered injuries due to the smartphone blast. The customer was an Auto Driver and said he was driving when the smartphone heated up in his trousers pocket. The explosion occurred while he quickly tried to remove the phone from his pocket.

Oppo replied through a tweet it is concerning to see this and will look into the issue. There’s no update regarding why the phone exploded.

This case involves not one but many Vivo Y20 smartphones that were blasted. Back in April, an entire lot of Vivo Y20 phones spontaneously caught fire on an airport tarmac in Hong Kong. Hundreds of Vivo Y20 units were turned to ashes. An exact reason for the combustion of phones wasn’t shared, but it was speculated to be related to the battery.

As a preventive measure, Hong Kong authorities stopped Vivo from exporting any smartphone until the source of the fire was determined. The user on Twitter shared multiple photos showing the incident. Eventually, it also resulted in a massive rollback of the device.

Xiaomi’s phones have always been mocked on social media for overheating, and it seems like things took a serious turn with this incident. In late April, a Redmi customer, Priyanka Pavra, complained of a Redmi Note 9 Pro/ Pro Max catching fire.

Priyanka’s brother spotted the incident and saw smoke coming out of the device out of nowhere. He then threw the smartphone in the water. Pavra further shared the photos of the burnt phone on Twitter. The pictures show the phone with a broken display, the back portion burnt, and the glass cracked due to smoke.

Based on its initial investigation, Redmi said that the damage was caused due to external force and thus, was classified under ‘customer induced damage’. However, the ‘external force’ here wasn’t specified as to what it was.

Another Xiaomi device that caught fire was Redmi 8. While the reason behind the blast wasn’t shared, the phone caught fire and even caused damage to the customer’s four-year-old niece, as per his claims. The user has deleted the tweet. However, he did get a Redmi 9 smartphone in replacement.

Poco C3 is yet another entry-level smartphone that got involved in the smartphone blasts incidents that took place in 2021. The smartphone exploded while in the pocket of the user. Luckily, the user could take it out of his pocket and throw it in his bag before it could harm him.

Poco X3 is the second smartphone from Poco to join the list of smartphones blasts of 2021. The smartphone combusted during the charging process. The user says that he bought the smartphone in December 2020 while it blasted in April of 2021. Poco got rid of the situation by saying that the blast was caused due to customer-induced damage as per its internal investigation.

Poco M3 exploded in India late in November last year. A Twitter user Mahesh (@Mahesh08716488) has revealed that brother’s Poco M3 caught fire and exploded. The image he shared shows that the phone’s rear bottom portion is completely damaged. Poco has acknowledged the issue and said that customer safety is of utmost importance and we take such matters extremely seriously.

The company said, “At this stage, our team contacted the concerned customer as soon as the issue was notified and is awaiting his visit to the nearest service centre. We are committed to examining the issue in detail, extend all our support to the customer, and resolve this on priority.

All our devices go through various levels of stringent quality tests to ensure that the quality of the device is not compromised at any level.”

So these are the smartphone blasts that happened in 2021. But, of course, one should always pay attention and not let the smartphone overheat, especially during summer when it is already very hot outside.

“Yesterday in night my aunty was found dead, she was using a Redmi 6A, she was sleeping and she kept the phone near her face on the pillow side & after sometime her phone blasted. It’s a bad time for us. It’s a responsibility of a brand to support,” his tweet read.

After the incident, Xiaomi issued a statement saying that it is working to reach out to the impacted family and investigate the situation. “At Xiaomi India, customer safety is of utmost importance, and we take such matters extremely seriously. Our team is trying to get in touch with the affected family and determine the cause of the incident,” Xiaomi said.

A Redmi Note 11T Pro allegedly exploded in China this month. The video of the smartphone explosion was shared by a Twitter user. Piyush Bhaskar (@TechKard) shared the post on Twitter from TikTok.

The video shows that Redmi Note 11T Pro charred badly and burnt. The back panel also melted completely till the camera bumped and was separated from the screen. Luckily, no one seems to be hurt in the incident. Xiaomi is yet to respond to the tweet about the explosion.