In the Scramble With Friends game, players compete against opponents to beat the clock and find as many words as possible. 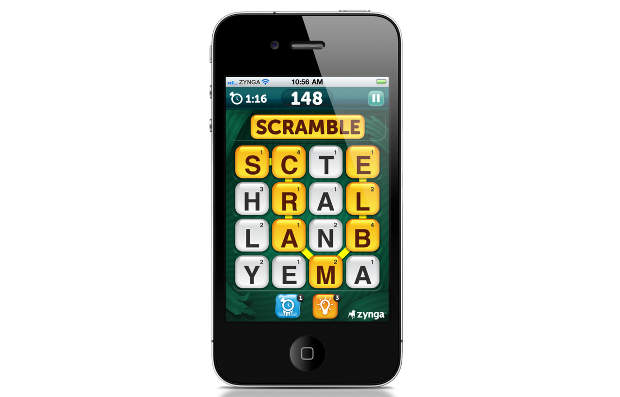 “Scramble With Friends takes one of Zynga’s earliest games and sprinkles the magic of ‘With Friends’ games to enhance play and bring players a raucously fun mobile social experience,â€ said David Ko, chief mobile officer for Zynga. “Our ‘With Friends’ franchise brings new twists to classic favourites and Scramble With Friends is no different. We’re dedicated to innovating in mobile social games and bringing more play into everyone’s day wherever and whenever they want.â€

Scramble With Friends is a made-for-mobile game where players compete against opponents to beat the clock and find as many words as possible on the game board. Each match consists of three rounds of two-minutes, and the player with the highest point total at the end wins. The game is social, simple, fast, and bonus-packed.

When the clock starts, find as many words as your eye can spy and watch the points rain down. The game consists of three rounds. Round one consists of classic play with standard point values for each letter. In the second round, double letter and word values strewn throughout the game board. In round three, play with triple letter words.

There is also an option of ‘Power Up’ which basically helps players to play the game. Under this, one can freeze the game for a moment by temporarily stopping the clock to find more words. Also, if you just got stuck somewhere, there is an ‘Inspiration’ option that provides up to three words you haven’t found yet.

Players start each match with tokens that are replenished over a period of 20-minutes. Each player can choose to spend a token for an additional Power-Up, adding a layer of strategy for how the game is played. Additional tokens are available through In-App purchase on the App Store.

Scramble With Friends is available for free on the App Store on iPhone and iPod touch or at www.itunes.com/appstore.