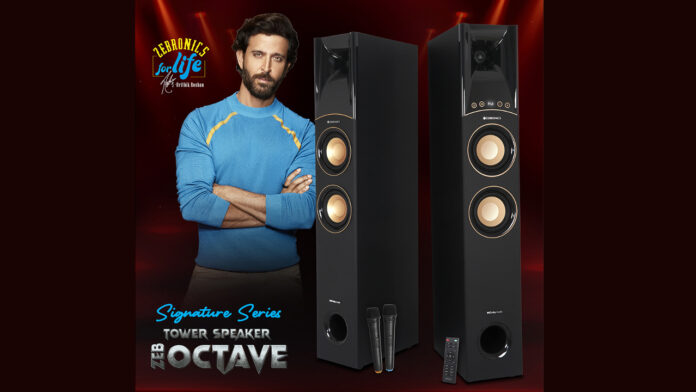 Zeb-Octave is currently priced at Rs 24,999. It can be purchased from Zebronics website and Flipkart.

The Zebronics Zeb-Octave speaker offers 340-WattRMS output. It features touch controls and an LED display on the front and it’s packed within a black and gold enclosure.

Zeb-Octave claims to deliver amazing audio quality with the Dolby experience and the Virtual 3D mode. It comes with its dedicated tweeters, double-mid range drivers and powerful subwoofers, in terms of audio.

Further, you can also connect the 2 wireless mics that come along with Zeb-Octave to sing away with the Karaoke feature to make memories. In addition, you can control your speakers with the remote control consisting of 4 equalizer modes as well.

Commenting on the launch of the product, Co-founder and Director, Pradeep Doshi, said – “After the ever-successful complete home entertainment range that includes soundbars, projectors & more, we are bringing out the tower speaker with Dolby audio that has impeccable design and features to give you the best listening experience. We’re the first Indian brand to have launched a tower speaker with Dolby Audio and that makes us immensely proud that we’re bringing the premium audio experience to the masses.”

The watch comes with a large touch screen and also has an advanced companion app on iOS and Android for easy monitoring and settings. It has 10 watch faces and you can select from more than hundred watch faces from the app.