Xiaomi Smart TV 5A to launch in India on April 27

The Xiaomi Smart TV 5A is all set to launch in India on April 27! 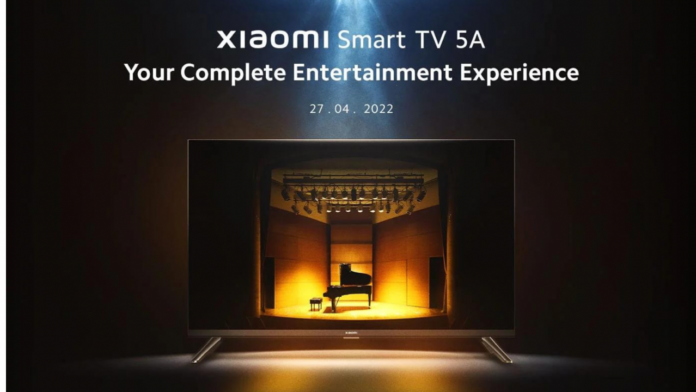 Xiaomi is set to host the big “Spring Summer Flagship Event” on April 27 in India where it will unveil the Xiaomi 12 Pro and the Xiaomi Pad 5. Now, the brand has announced that it will also launch a new television which will be the Xiaomi Smart TV 5A. While not much has been revealed by the brand about the TV, it has teased the design of the Smart TV 5A.

Xiaomi now has a teaser page up on its website for the Smart TV 5A. However, it does not reveal much about the television, except for its design and the chipset. The teaser suggests that the Smart TV 5A will have very thin bezels on the top, right and left sides with a thick one at the bottom where the ’Xiaomi’ branding will reside. It is going to pack an ’A55’ chip under the hood while more details are yet to be disclosed.

Lastly, one of the teaser images also shows Xiaomi’s PatchWall UI which should be based on Android. As for the specs of the upcoming tablet from Xiaomi which was already launched in China back in August, it should feature an 11-inch WQHD+ (1,600×2,560 pixel) TrueTone display with a 120Hz refresh rate, Dolby Vision and HDR10 support.

The tablet should be powered by a Qualcomm Snapdragon 860 SoC, paired with 6GB of RAM. Further, the Xiaomi Pad 5 should come with up to 256GB of storage.