Xiaomi Mi 8 Anniversary Edition will be unveiled on May 31

The next flagship from Xiaomi will come with the company's first of its kind in-screen fingerprint scanner alongside the Mi Band 3 fitness tracker and the Mi 7 which is expected to come with 3D facial recognition system, which will be the direct successor to the Xiaomi Mi 6 that was launched last year.

As expected, Xiaomi has finally revealed the date of launch for the company’s next flagship Mi 8 smartphone which is now set for an unveiling on the 31st of May in Shenzhen, China. Pegged to be coupled with the Mi 7, the Mi 8 will be one of the many products launched at the upcoming event as has been confirmed by company CEO Lei Jun.

Posted on Weibo, the teaser displayed a huge ’8’ which means Xiaomi is really working hard to host its eighth anniversary and its next flagship might likely be called the Mi 8 Anniversary Edition or just Mi 8 to keep things simple. The Chinese company is also expected to launch a slew of new products including a new fitness tracker that could be the Mi Band 3 and the Mi 7 smartphone, a successor to the current Mi 6 device. 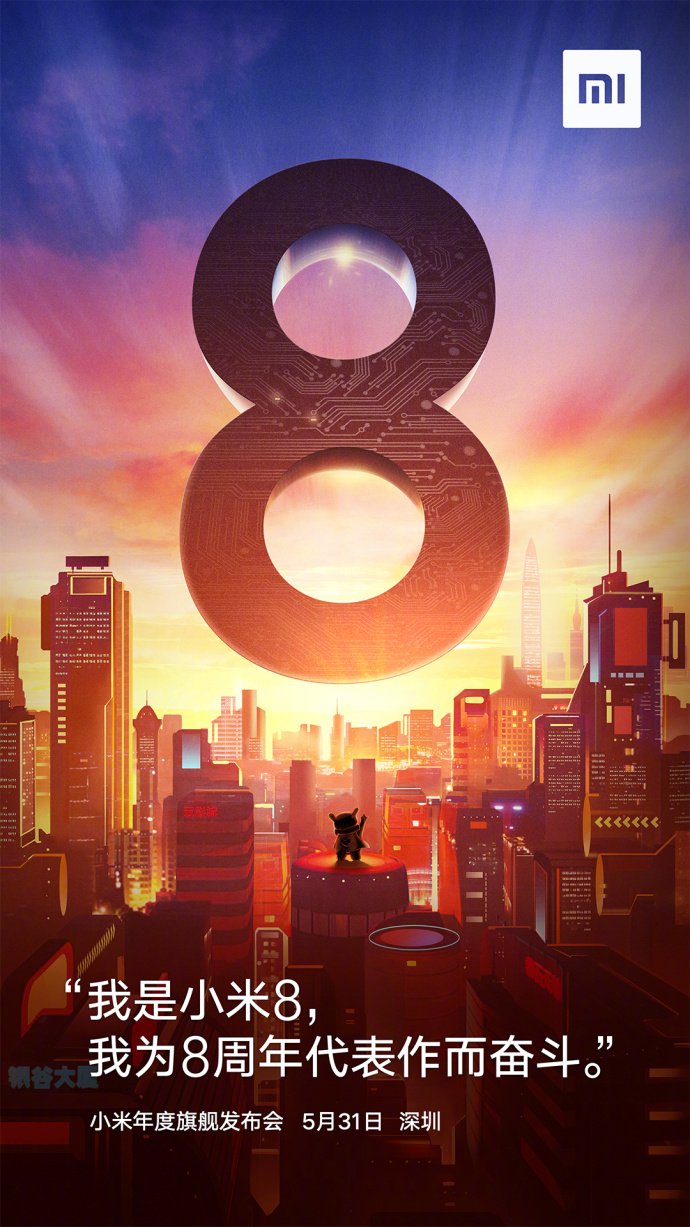 It appears that the Chinese smartphone giant has already sold tickets for the upcoming event and the launch of the Mi 8 will mark the most significant event in the recent years, with as much as 5,000 attendees as guests. Though the highlight of the May 31 event will clearly be the Mi 8, the recent FCC certification of the Mi 7 means there is clearly more than a device to look forward to.

Two Xiaomi smartphones have now received approval from US’ FCC and 3C in China, a week ahead of the May 31 event. It’s widely speculated that these two phones are the two variants of the upcoming Xiaomi Mi 8. Modelled as M1805E1A and M1805E1A, the only thing we can be sure of is the fact that both of these devices carry support fast charging at 5V/3A, 9V/, A and 12V/1.5A.

If rumors are anything to be believed, the upcoming Xiaomi flagship will be powered by a Qualcomm Snapdragon 845 SoC inside a device which features a 6-inch OLED display. There might likely be a notch at the top, an in-screen fingerprint scanner and a 3D facial recognition system.