This is the same day when Samsung will be launching latest flagship smartphones under its Galaxy S20 series.

Chinese smartphone maker Xiaomi is currently working on its upcoming Mi 10 and Mi 10 Pro flagship smartphones. The phones are already rumoured to be launched in February this year. The company has not yet announced the launch date for the upcoming smartphones, but a leaked poster has now revealed a possible launch date.

As per the leaked poster, the upcoming Mi 10 and Mi 10 Pro smartphones will be launched on 11 February in Beijing, China. This is the same day when Samsung will be launching latest flagship smartphones under its Galaxy S20 series. 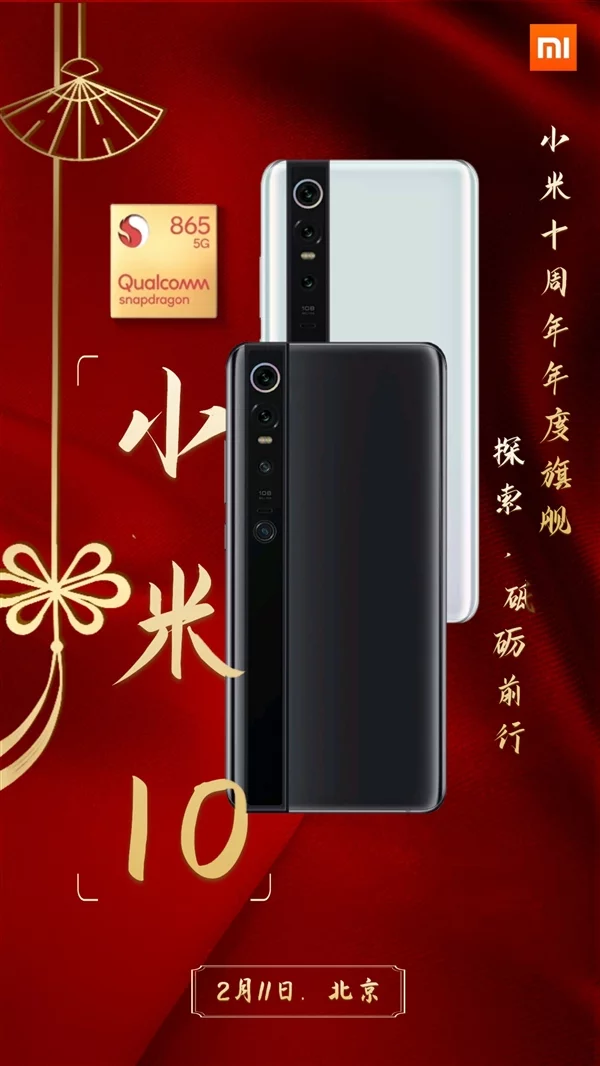 The poster shows the rear design of the white and black colour variants of the Mi 10 smartphone. The phone features curves towards the edges. It showcases the same rear camera design of the Xiaomi Mi MIX Alpha concept phone.

The phone has a quad rear camera setup with two camera sensors at the top followed by an LED flash. There is a 108-megapixel lens as a third sensor, a module which seems to be for laser autofocus and a fourth sensor. There are volume rocker keys and a power key on the right side of the phone.

Separately, Mi 10 Pro carrying model number M2001J2G has also surfaced on the database of Russia’s Eurasian Economic Commission (EEC) which hints that the smartphone will also launch in some European markets apart from China.

Xiaomi Mi 10 is said to feature a 6.57-inch AMOLED display with a 90Hz refresh rate. It will be backed up by 4500mAh battery with quick charge support. The phone will be powered by octa-core 2.84GHz Snapdragon 865 processor. Mi 10 will have 12GB RAM and 256GB/ 512GB storage. It will come with a quad-camera setup with a 64MP primary camera, 12MP, 8MP and 2MP. For the front, there will be 32MP + 8MP dual selfie camera. There will also be a facial recognition and under-display fingerprint sensor.

Share
Facebook
Twitter
WhatsApp
ReddIt
Previous articleRealme UI update: Realme XT, 3Pro to get today, here’s how to get it
Next articleRealme UI based on Android 10 rolling out now for Realme 3 Pro
RELATED STORIES