WhatsApp, a company owned by Facebook, has launched two new features exclusively for its iOS app – Lock Record Button and a new Picture-in-Picture mode for YouTube videos.The updated version of the application was first spotted by a WhatsApp news website, the WABetaInfo.

The Picture-in-Picture mode will allow users to play YouTube videos directly in the application, instead of pausing the conversation. With this, whenever a person receives a link to a video, the WhatsApp will instantly play it in the chat box, rather than switching to the YouTube. 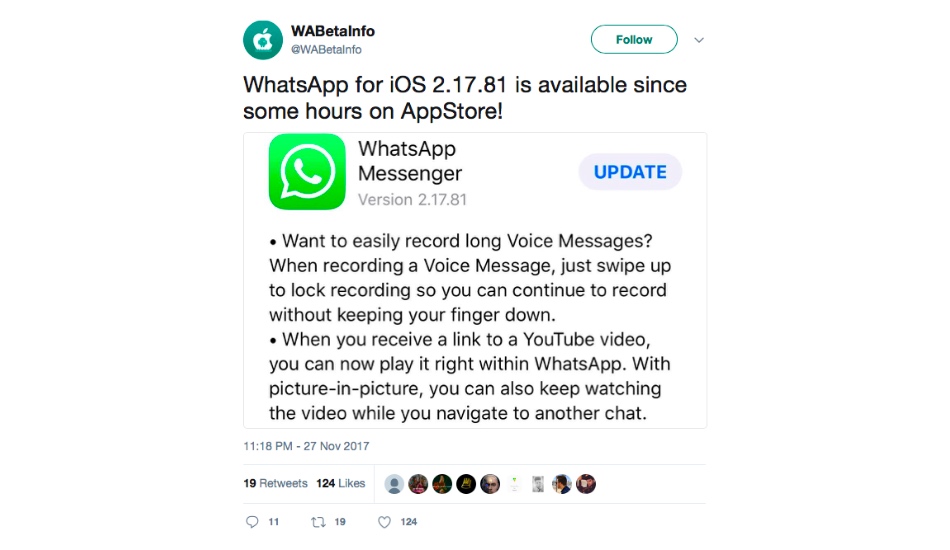 Additionally, the company has also made some improvements to the voice recording feature. Earlier, to record a voice note, one had to long press the icon to record a message. But with the new update, the user will be able to lock the record button and release it later once the message is completed. However, the option is disabled currently and expected to go online in few days.

Meanwhile, the company is reportedly working on a new feature that will allow users to switch between voice and video calls quite easily. The latest feature has been spotted on the latest Android beta version 2.17.163.

The app will come loaded with a new button that will allow users to quickly switch from voice to video calls without stopping the voice calls in progress. The recipient will have an option to reject the incoming video call as well.