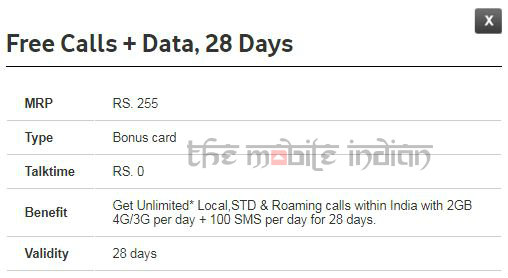 On recharge of Rs 255 pack, customers will get 2GB of 4G/3G data per day and the pack is valid for 28 days, it means you will get 56GB of data. Apart from this, the pack offers the benefits of unlimited local and STD voice calls, free calls on roaming and 100 SMS per day. However, the unlimited calls do come with some restrictions as one only call 250 minutes per day and 1000 minutes per week.

If we compare with the other operators plan, the Idea pack offers 2GB of 3G/4G data per day along with unlimited voice calls on local and STD networks including national roaming. Further, the pack comes with a validity of 28 days, which makes the total data count of 56GB for the entire month. Furthermore, the unlimited voice calls come with a capping of 250 minutes per day and 1,000 minutes per week. Apart from this, users will get free SMS benefits as well.

In Airtel pack, customers get unlimited voice calls on local and STD network along with free national roaming calls. The pack offers 2GB of 3G/4G data along with 100 SMS per day. So, the plan is offering a total of 56GB of data for 28 days.

However, it is Reliance Jio that is leading the race as the telecom operator is offering the same above-mentioned benefits for just Rs 198. Under this offer, users will get 56GB of data with a daily limit of 2GB per day along with unlimited voice calls, 100 SMS per day and complimentary subscription for Jio suite of apps. All this with a validity of 28 days.