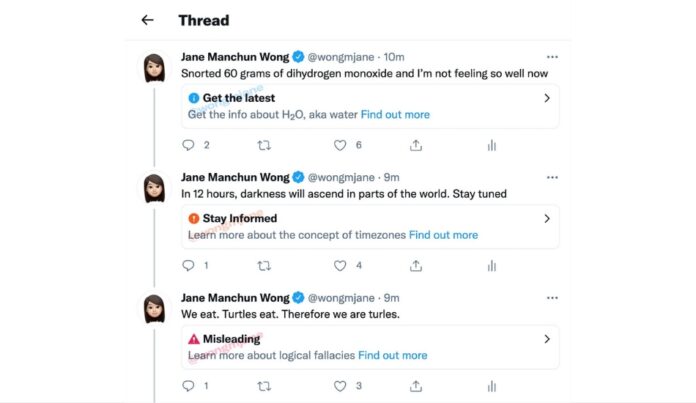 Twitter is working on categorising its tweets under three labels to prevent the spread of misinformation on its platform.

Fake information spreads like wildfire these days and Twitter seems to be working on some features so tackle this phenomenon on its platform. It is working on bringing three types of labels that will be shown next to a tweet which will inform the user about how authentic the tweet is.

As per reverse engineer expert Jane Manchun Wong who posted the screenshots of the three new labels, these labels are still a work-in-progress and there is no information as to when they would go live on Twitter. To identify which tweet should lie under which label, Twitter will need to analyse a big dataset.

Out of the three labels, the “Get the Latest” label will offer the most up-to-date information on the topic in the tweet. The “Stay Informed” will offer more details regarding the concept that has been discussed in the tweet. Finally, the “Misleading” label will tell the reader that the tweet may be factually incorrect.

In related news, the social media company came under the radar of the Indian Government as it marked one of the ruling BJP leader’s tweets as ‘Manipulated Media’. Because of this, its office in India has been paid a visit by the Delhi Police.

The company is also working with the Government so that it can effectively comply with the new IT rules. An official statement from a Twitter spokesperson said, “As we have stated earlier, Twitter strives to comply with applicable laws in India. We continue to be strictly guided by principles of transparency, a commitment to empowering every voice on the service, and protecting freedom of expression and privacy under the Indian law”.