Twitter announced that it is testing a dedicated Cricket tab in its app exclusively for the Indian users. 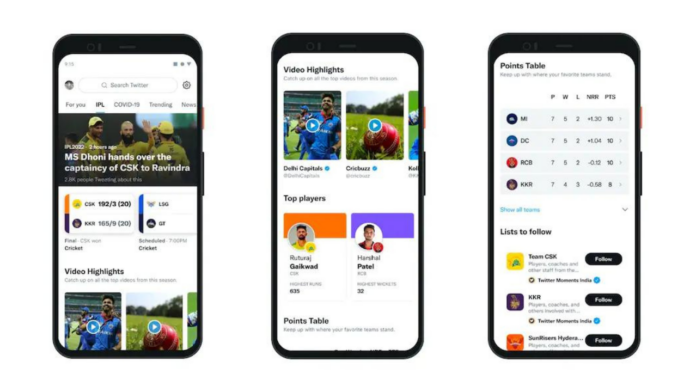 Amid the IPL season, Twitter has a good news for Cricket fans in India as it announced that it has started testing a dedicated cricket tab that will act as a one stop for the fans where they will be able to catch all the latest updates about their favourite matches, teams, and players. Moreover, it recently also introduced custom IPL team emojis in English and seven Indic languages.

The Cricket tab is rolling out under the Explore section inside the Twitter app. It is arriving as an experiment in the Twitter Android app. “Everyday people come to Twitter to keep informed about what’s happening and their interests… Starting this week, the service will be testing a Cricket Tab on its Explore page, rolling out the experiment to some people in India who use Twitter on Android”, the company said in a statement.

Using this tab, users can get access to exclusive video content, real-time match updates through a Scorecard and other interactive widgets. Further, Twitter said that users will be able to activate custom cricket team emojis in English and seven Indic languages including Hindi and Tamil. “The tab will be a single landing point that will serve as a channel of discovery for what’s happening in cricket along with relevant, exclusive, and Twitter-first content,” the company said.

Read More: Twitter gets a new CEO: Things You Should Know

In addition, Twitter has partnered with Star Sports for expert AMA sessions, franchise content, and in-studio action in five languages including English, Hindi, Tamil, Telugu, and Kannada. The Cricket tab will also show panel discussions, match previews, and reviews via Cricbuzz and pre- and post-match shows and interviews from sports journalist Boria Majumdar.

Moreover, Twitter will feature cricket-related tweets using machine learning on the Cricket tab. Cricket lovers can also follow the IPL topic on the platform to get the latest updates from the tournament. Cricket fans on Twitter can also follow dedicated Twitter Lists of their favourite teams and players to get subject-related tweets on a separate timeline. Twitter will also provide push notifications around key moments during matches so you can stay updated.