CDMA providers offer cheaper high speed data services compared to 3G, but which of the operators is the cheapest?

CDMA operators were the first in the high speed wireless data game, but now with GSM players offering 3G services, they are not the only ones.

However, they are still the only ones with a pan India service as none of the 3G providers is present in more than 15 circles. And perhaps that’s the reason they continue to price their services on par with 3G operators and not much below them; but they are definitely cheaper. 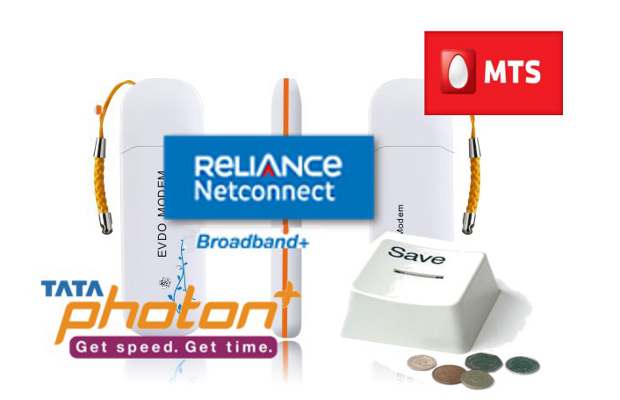 But which one is the cheapest?

MTS is offering unbundled data beyond the data cap at 30 paise per MB but only for its smartphone users. On the other hand, MTS dongle prepaid users pay Rs 1 per MB and postpaid users pay 40 paise per MB for extra usage beyond their package. The slower speed beyond high speed data limit is a decent 144kbps which is better than all GSM 3G offerings.

Currently, MTS is offering many unlimited packages to its prepaid customers starting from one day pack worth Rs 96 that offers 1 GB high speed data, to a 7 day pack that costs Rs 298 for 2 GB unlimited data. In terms of monthly packs, you have the option of 5 GB, 10 GB, and 15 GB packs which costs Rs 798, Rs 999 and Rs 1,298 respectively.

The post paid customers have it even better with Rs 444 offering 3GB per month and extra usage charged at 40 paisa per minute. Unlimited packs offer slightly extra too like 6Gb and 12 GB instead of 5 and 10 in the prepaid.

Reliance Communications offers just four packs under its CDMA data service. The base pack costs Rs 250 and offers 1 GB bundled usage, and thereafter the teleco charges just 20 paise per MB till your bill reaches Rs 1,250, after which data is free though at a slower speed of 64 Kbps. This plan is not available for prepaid users.

Other plans that it offers are very similar to GSM 3G providers including RCom, and even the charges for unbundled usage are similar to them at 3 paisa per 10KB (Rs 3 per MB).

Tata Photon+ offers a Rs 300 plan, which offers just 512 MB data but beyond this you can enjoy high speed data at 20 paise per MB till you get to a bill of Rs 750 or Rs 1,250 (you can choose the limit,) after which data is unlimited but at a useless speed of 10 Kbps.

MTS has the widest choices with a lot of unlimited, limited and long validity plans. However, Tata Docomo Photon+ also offers nice plans for those who are not very high data users by offering very low data charges above the bundled data. Tata Docomo Photon+ also offers right combination of unlimited plans which is very similar across these three operators.

RComâ€™s Rs 250 pack is also attractive but is only applicable to postpaid data card users. Rest of the packs are priced very similar to other operators including GSM 3G offerings.