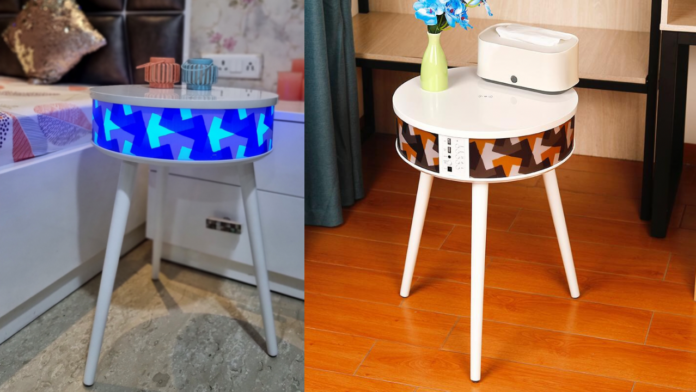 Sevenaire has launched MARS in India, a Bluetooth enabled Surround Sound Speaker Table. MARS is a fully-functional bedside/coffee/side table that combines a modern furniture design with technology that works for you, says the company. It can stream your favourite music, charge your smartphone, and even display some funky lights as its equipped with an LED.

MARS Speaker table by Sevenaire will be offered in a single White color for a price of Rs 17,999 including a 1-year warranty period. It will be available on Amazon.in and Sevenaire’s own website.

MARS by Sevenaire is a feature-rich Bluetooth speaker embedded in a modern-design coffee table. Designed using premium wood with a High Gloss Piano finish, this three-legged Surround sound speaker table serves in your living room, bedroom, lawn, or office. The 360° design hides behind it a wireless music system along with some switchable LED lights that play along with the music.

You can stream music from your smartphone, tablet, or laptop via Bluetooth or connect them using an aux cable. Additionally, you can also plug in a USB flash drive with your favourite MP3 music tracks and use it as a standalone player. The speakers are built around the sides that produce a 360° consistent and uniform full surround sound in all directions.

Built alongside the speakers, the LED lighting screen produces different colors in 6 modes of vivid lights using the built-in equalizer effect option. Sevenaire also provides a fully-functional IR Remote controller, using which you can control the volume, tracks, and LED lights on the speaker table.

Lastly, MARS also doubles up as a power bank that can charge your devices wirelessly as well as via a USB port. The wooden top has a built in wireless charging pad that can wirelessly fast charge your smartphone with up to 10 watts of power. Latest Smartphones from Apple, Samsung, OnePlus & Google are compatible with MARS’ wireless fast charging feature.

Other smartphones can be charged using the respective USB Cable plugged directly into the USB charging port on the table. Built within the table is a rechargeable Lithium-Ion battery that can power the speakers and charge your smartphones even when you don’t have direct power available at your disposal.