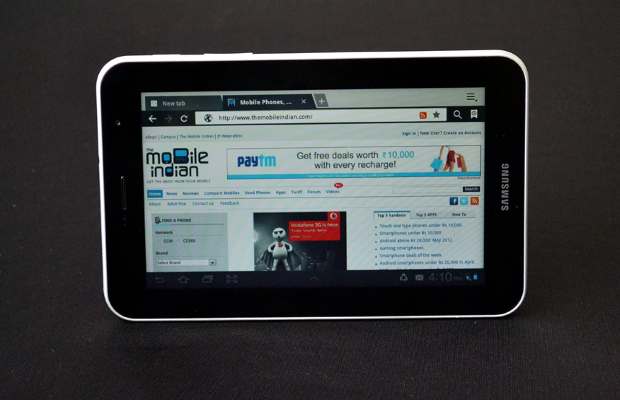 UPDATE: An Amazon listing has now confirmed that Samsung Galaxy Tab A7 Lite will launch in India on June 23 at 12PM.

Samsung is all set to launch two new tablets in India next week, the Galaxy Tab S7FE and Galaxy Tab A7 Lite. The two devices are likely to go on sale on June 23, industry sources said on Tuesday.

The new tablets were spotted on a teaser page on Amazon India and it suggests that they will go on sale on June 23.

The Samsung Galaxy Tab S7 FE sports a 12.4-inch 2560×1600 LCD touchscreen with 60 Hz refresh rate. The Tab S7 FE is powered by the Snapdragon 750G processor paired with 4GB of RAM and 64GB of internal storage which is expandable via MicroSD card.

For the cameras, there is a single 8-megapixel shooter at the back with a 5-megapixel front facing camera. The tablet packs a 10,900mAh battery which supports up to 45W fast charging. However, the 45W fast charger is sold separately, which juices up the huge battery in about 190 minutes from 0 to 100%.

You also get an included S-Pen with the tablet along with a pre-installed app called Clip Studio Paint that is available for free for the first six months. Connectivity features include 5G, Bluetooth, Wi-Fi, USB-C port for charging and more.

Samsung Galaxy Tab A7 Lite tablet comes with a 8.7-inch WXGA+ TFT display with a screen resolution of 1340 x 800 pixels and symmetrical bezels. The tablet is powered by the Helio P22T chipset (MT8768T) with up to 4GB of RAM and up to 64GB of internal storage, which can be further expanded up to 1TB via microSD card slot. The tablet is fitted with a dual-speaker setup that supports Dolby Atmos technology.

On the camera front, the Galaxy Tab A7 features an 8-megapixel rear camera with LED flash, auto focus, while for the front, there is a 2-megapixel shooter. The tablet is loaded with a 5,100mAh battery with 15W fast charging and it runs on Android 11 operating system. In terms of connectivity, it supports 4G LTE (Optional), Wi-Fi 802.11 ac (2.4GHz/5GHz), Wi-Fi Direct, Bluetooth 5 LE, GPS, GLONASS, and USB 2.0 Type-C.