Samsung Galaxy Tab S6 gets its first update in India

The update comes with version number T865XXU1ASH6 and it is around 316.65MB in size.

Samsung recently introduced its new flagship tablet, the Galaxy Tab S6, in India for Rs 59,990. Now, the company has started rolling out a new update to its latest tablet.

The update comes with version number T865XXU1ASH6 and it is around 316.65MB in size. The update brings older August 2019 security patch to the latest flagship tablet. It also improves the stability of the camera. The update also brings some bug fixes along with some stability improvements. Galaxy Tab S6 users can check for the update by going to Settings > Software Update > Download an Install.

Recollecting some key specifications, the Galaxy Tab S6 features a 10.5-inch WQXGA Super AMOLED screen with a resolution of 2560×1600 pixels and an aspect ratio of 16:10. 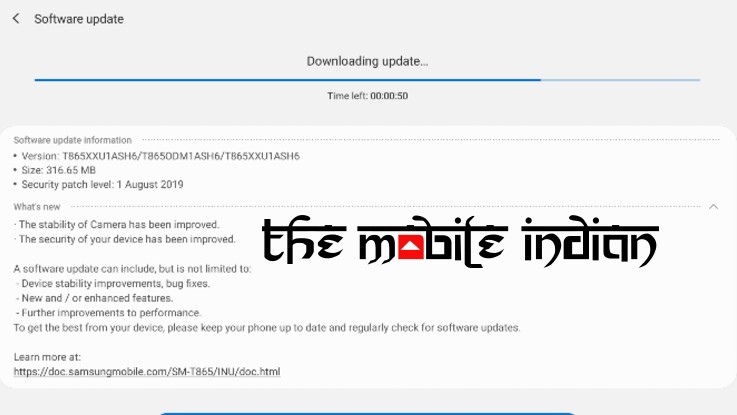 It features an in-display fingerprint sensor in the front. The tablet is powered by a Qualcomm Snapdragon 855 chipset with Adreno 640, 6GB RAM and 128GB of onboard storage. The storage can be expanded to up to 1TB through a microSD card.