The tablet will come in two variants with SM-T820 and SM-T825 model numbers.

Samsung is holding an event on February 26, 2017, where it is expected to unveil the new Galaxy Tab S3 for which it has started sending out invites as well. The event starts at 19:00 CET (11:30 IST) at Palau de Congressos de Catalunya, Barcelona. The tablet will come in two variants with SM-T820 and SM-T825 model numbers. While the former is said to be Wi-Fi only, the latter is said to come with LTE support.

The Samsung Galaxy Tab S3 SM-T825 variant has earlier got the all necessary approval from Federal Communications Commission (FCC). Now the other variant SM-T820 has also received the FCC certification. For those who don’t know about FCC, Federal Communications Commission (FCC) regulates interstate and international communications by radio, television, wire, satellite and cable in the US. The tablet has already got the Wi-Fi and Bluetooth certifications earlier.

The FCC document, however, does not reveal anything but it includes the ID of the device which is SM-T820 which is said to be the Wi-Fi model of the Galaxy Tab S3. 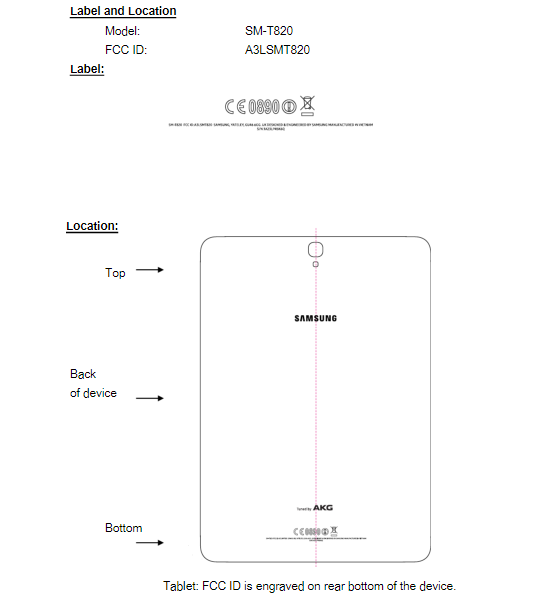 The Samsung invite revealed the bottom front of the tablet with a home button which resembles quite a lot to the previously launched Galaxy Tab S2. The home button is expected to come equipped with a faster fingerprint sensor this time around.

The Galaxy Tab S3 rumoured specifications include a 9.7-inch display with a resolution of 2048 × 1536 pixels. We are not really sure if it will be an LCD panel or Samsung will yet again go for its trademark Super AMOLED display. Apart from this, the new Tab S3 is expected to be powered by a Snapdragon 820 chipset coupled with 4GB of RAM. Samsung is also expected to give a 32GB or 64GB of internal storage which will be further expandable. The tablet is rumored to come with a 12-megapixel rear camera coupled with a 5-megapixel front-facing camera. Also, we are likely to see Android 7.0 Nougat on board. As far as other specifications are concerned, we will keep you updated about the same as we head closer to the launch event.

The Samsung Galaxy Tab S2 has a powerful Exynos octa-core processor and huge 3 GB RAM. It also offers an 8-megapixel autofocus rear camera and a 2.1-megapixel front camera. The tablet has a fingerprint scanner as well along with Accelerometer, Gyroscope, Compass, Hall and RGB sensor S2.