Seems like Samsung is getting ready for the launch of a new tablet soon in the United States. The Samsung Galaxy Tab A 10.1 (2018) tablet has been spotted on Geekbench benchmarking website with model number SM-T387V. The listing has shown some of the expected specifications of the upcoming smartphone.

In the GeekBench listing via MySmartprice, the Galaxy Tab A 8.0 (2018) got 653 points in single-core test and in multi-core test it received 1831 points. As per the listing on Geekbench, the Galaxy Tab A 8.0 (2018) has 2GB RAM and 1.40 GHz octa-core processor (Snapdragon 430 expected). The tablet is based on the Android 8.1.0 Oreo operating system with Samsung’s custom UX layer on top. 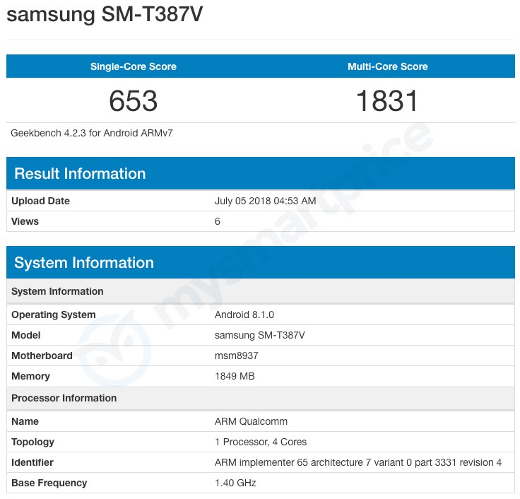 Meanwhile, Samsung is prepping up for the launch of Samsung Galaxy Tab S4. The tablet is most likely during this year’s IFA event in Berlin starting August 31. The Samsung Galaxy Tab S4 will launch in Black and Grey colour options. The Samsung Galaxy Tab S4 will feature a 10.5-inch QHD display with a resolution of 2,560 x 1,600 pixels and an aspect ratio of 8:5. It will have 4GB RAM and Qualcomm Snapdragon 835 1.90 GHz octa-core processor. The device will be based on the Android 8.1.0 Oreo operating system with Samsung Experience version 9.5 and 7300mAh battery. It will have a 13-megapixel rear camera with flash and an 8-megapixel front camera.