Now ahead of the launch, two variants have now been spotted on the Federal Communications Commission’s website (FCC), and the listings reveal the design of the Galaxy Note 10+.

The Galaxy Note 10+ photos from the US FCC listing were first spotted by XDA Developers. As per the images on FCC listing, the phone will feature a triple rear camera setup at the back which will be aligned vertically, and it will be placed in the top left corner. The Samsung Galaxy Note 10 and Samsung Galaxy Note 10+ have received FCC certification with model number SM-N975F and SM-N976B respectively. The image however doesn’t show any buttons on the right edge. 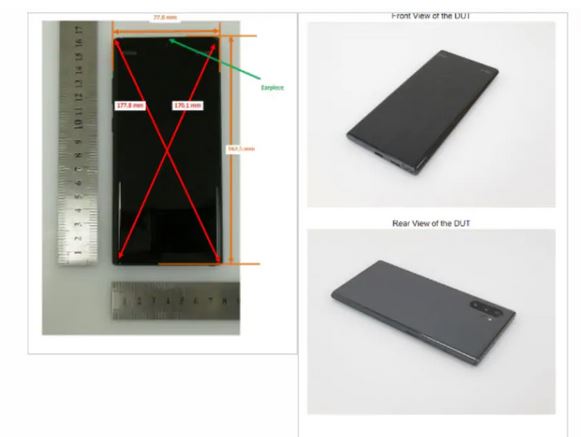 The image shows that the Galaxy Note 10+ will not feature any 3.5mm audio jack and Bixby button. On the left side of the phone, there will be power and volume buttons. The phone is expected to sport an ultrasonic under-display fingerprint sensor, and a hole-punch camera in the centre. Further, the listing also reveals that the phone will measure 62.3 x 77.4 x 7.9mm in dimensions. It will sport dual-band Wi-Fi 6, previously known as 802.11ax, and Bluetooth v5.

The Galaxy Note 10 will reportedly feature a 6.28-inch 2K AMOLED display and it is said to feature 4170 batterywith 45W fast charging. The Galaxy Note 10 Plus will come with a relatively larger 6.75-inch screen with 1440 x 3040 pixels resolution and 19:9 aspect ratio and to be powered by either a Qualcomm Snapdragon 855 SoC or an Exynos 9820 SoC. The device might have four rear cameras, 12GB of RAM, UFS 3.0 flash storage, and a 4,500mAh battery along with a 45W charger.