The upcoming Samsung Galaxy Buds 2 specs have now been leaked in full. The device could come with IPX7 rating, active noise cancellation and more. 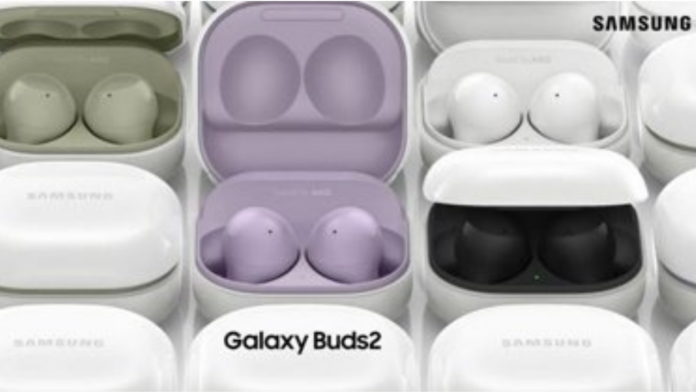 Samsung’s Galaxy Unpacked Event is exactly a week away from today and one of the products launching at the event has been detailed once again. A full specs leak for the Galaxy Buds 2 that are supposed to launch on August 11 has now appeared on Twitter.

The leak comes from tipster Snoopy (@_snoopytech_) on Twitter. As per the leakester, the Samsung Galaxy Buds 2 will have the latest Bluetooth 5.2 that will handle the connectivity. You will further get a 61mAh battery in each earbud. The case in which the earbuds will charge, will pack a 472mAh battery.

Moving on, the buds themselves will have a glossy finish. The buds will also sport Active Noise Cancellation feature along with a transparency mode for clearer Ambient sounds. This will be achieved through a 3-mic setup as per the Galaxy Buds 2 specs leak.

You should get 18 hours of battery with ANC ON. This includes 5 hours from the earbuds plus 13 hours more with charging case. With ANC Off, you get 28 hours constituting 8 hours from earbuds with 20 more hours with case. You should be good to go for 55 minutes of playback with a 5 minute charge.

The case will also supports Qi wireless charging. Each of the earbud will have two drivers including an 11mm woofer and 6.5mm tweeter. And finally, the Galaxy Buds 2 specs leak reveal that the buds will have IPX7 rating making it water and dust resistant.

The Galaxy Buds 2 have been leaked earlier as well. The previous leak suggested the earbuds will come in white, purple and green colours. As there’s no official information from Samsung regarding the specifications of the Galaxy Buds 2, the information provided above should be taken a with a pinch of salt.