The Galaxy A01 Core is also powered by a MediaTek MT6739 chipset with four CPU Cortex-A53 cores running at 1.5GHz.

Samsung Galaxy A01 was announced by the company in December last year. Now Samsung is gearing up to launch Galaxy A01 Core smartphone as well. The new Samsung smartphone has been spotted on Google Play Console.

The listing has revealed the key specs and a render of the upcoming smartphone. The render only shows the front panel of the Samsung Galaxy A01 smartphone. For the specs, the phone is listed with HD+ display with a screen resolution of 1480 x 720 pixels and 320ppi. 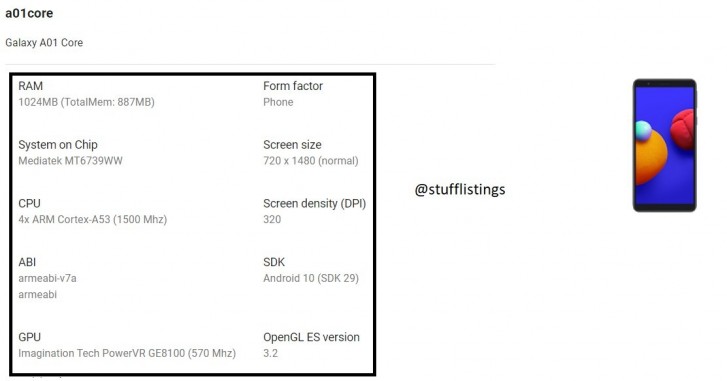 The listing further reveals that the phone will come with 1GB of RAM and it will run on Android 10 operating system. The Galaxy A01 Core is also powered by a MediaTek MT6739 chipset with four CPU Cortex-A53 cores running at 1.5GHz.

The phone has also been certified at Bluetooth SIG with Bluetooth 5.0. Additionally, the phone also appeared at the Wi-Fi Alliance website with SM-A013F and SM-A013F_DS model numbers. The Galaxy A01 Core will have Wi-Fi 802.11 b/g/n, and the certification reveals that the phone will run Android 10 OS.

Meanwhile, the Samsung Galaxy A01 has a dual-camera setup of a 13-megapixel main camera and a 2-megapixel depth sensor. For the front, the phone has a 5-megapixel camera with f/2.0 aperture. It features a 5.7-inch HD+ Infinity-V display and is powered by an octa-core processor. The Samsung Galaxy A01 is backed up by a 3,000mAh battery.