Samsung has unveiled its Exynos W920 chip for next generation wearables. It is the first chip in the industry to be built with 5nm process node. 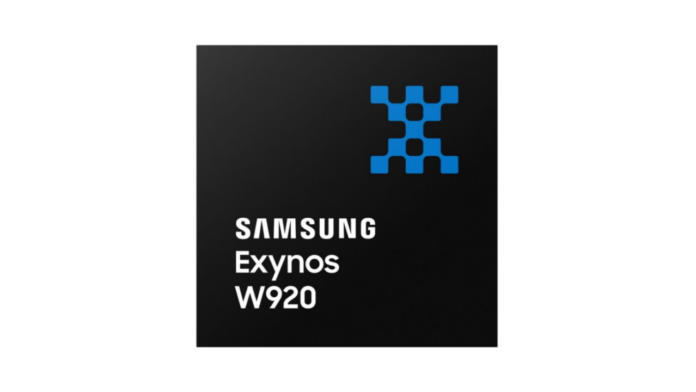 Samsung, just a day ahead of its Unpacked Event, today announced its new wearable processor, the Exynos W920. The new processor integrates an LTE modem. It is the first in the industry to be built with an 5-nanometer (nm) extreme ultra-violet (EUV) process node.

The new chipset will provide “powerful yet efficient performance demanded by next-generation” wearable devices. The Exynos W920 packs two ARM Cortex-A55 cores for high-performance and an ARM Mali-G68 GPU. This results in an improved CPU performance of around 20-percent and ten times better graphics performance than its predecessor.

Samsung has also done optimizations on the chip for better Always-on display performance of the watch. Rather than powering up the main CPU, the W920 activates a dedicated low-power display processor, the Cortex-M55. This reduces display power consumption under AOD mode compared to its previous Exynos model.

Exynos W920 is embedded with a 4G LTE Cat.4 modem as well as a Global Navigation Satellite System (GNSS) L1 for tracking speed, distance and elevation during outdoor activities. The Exynos W920 supports a new unified wearable platform Samsung built jointly with Google, and will be first applied to the upcoming Galaxy Watch model. The Galaxy Watch 4 series from Samsung has already leaked extensively in the past.