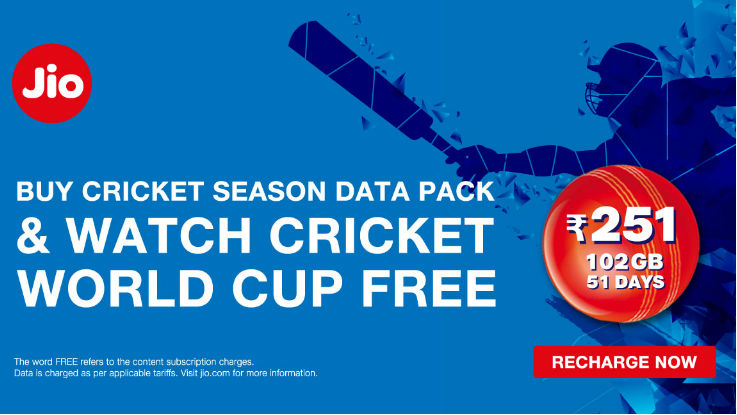 The telecom operator has also introduced a new Cricket season data pack for its prepaid users.

Reliance Jio has announced that its customers, both prepaid and postpaid, can watch the ICC Cricket World Cup 2019 live for free. The telecom operator has also introduced a new Cricket season data pack for its prepaid users.

Starting with the announcement, Reliance Jio has revealed this information on its official Twitter handle. Under this offer, Jio users can access the ICC World Cup 2019 live and free on Hotstar. In order to do this, one needs to open the JioTV application and click on the World Cup banner. The app will redirect you to Hotstar where one can watch the live cricket matches without paying any kind of subscription to Hotstar.

Furthermore, in order to sweeten the deal, the company has also introduced a new Cricket season data pack for its customers. The pack comes with a price of Rs 251 and it is valid for 51 days. With this, Jio users will get 102GB of data for the entire period of validity. The pack also offers unlimited voice calls along with free SMSes.

Meanwhile, Reliance Jio has extended the Prime subscription for one year to all its existing customers. The membership has been auto-renewed to certain customers across the country. With Prime membership, Jio customers can avail the host of Jio apps including JioCinema, JioMusic, JioTV and more. The Prime members also get additional data along with exclusive offers and more.