Reliance Jio Prime vs Airtel vs Vodafone vs Idea: Which is the best starter pack? 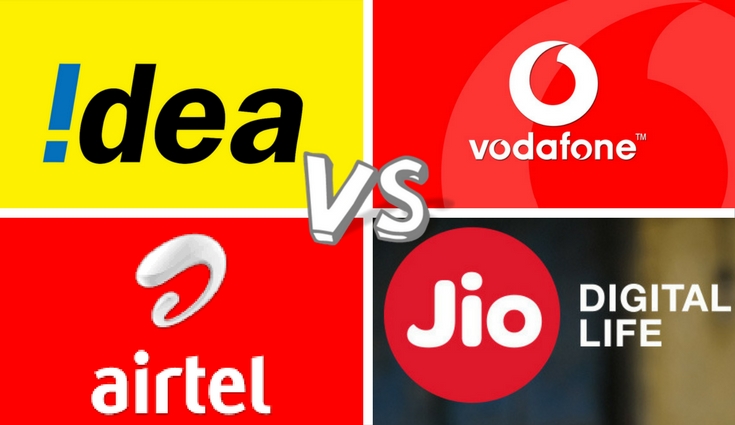 Ever since its commercial launch back in September 2016, Jio has changed the entire telecom space in India. Competitors like Airtel, Vodafone and Idea Cellular has been on their toes to bring out competitive tariffs.

Earlier this month, Reliance Jio Prime membership went live through which users will continue to enjoy all the services under the current Happy New Year offer for one more year. Ever since its commercial launch back in September 2016, Jio has changed the entire telecom space in India. Competitors like Airtel, Vodafone and Idea Cellular has been on their toes to bring out competitive tariffs. Soon after Jio Prime membership went live, Airtel, Vodafone and Idea Cellular released their own version of bundled plans offering free local+STD calls and up to 28GB of data for prepaid users. On the other hand, postpaid users are also treated with some lucrative plans. While Jio Prime membership looks quite attractive, let’s break down some similar plans from all the top telecom operators and compare them.

As mentioned above, Jio Prime membership will enable to enjoy the current Happy New Year benefits for another year. To subscribe to Jio Prime, the existing Jio users or the ones who subscribe to Jio before or on 31st March 2017 are required to pay Rs 99 as an entry fee. Further, starting 1st April 2017, these users will then have to pay just Rs 303 per month to avail free unlimited calls, SMS and 1GB internet per day. In other words, one can then avail 28GB of data for just Rs 303 with a validity of 28 days. Also, Jio users will still continue to enjoy free 4G internet from 2 AM to 5 AM at night. On the other hand, Jio is offering 30GB of 4G mobile data for postpaid users at the same price and same other benefits.

If 1GB per day is not enough for you, another plan which is priced at Rs 499 will offer 56GB of 4G data along with free unlimited calls and SMS. However, we do get a 2GB daily limit on this plan. You can check the entire portfolio of plans here.

Bharti Airtel still leads in terms of user base and is also the best when we talk about network and connectivity. And with the latest pack which is priced at Rs 345, Airtel seems to have hit the bull’s eye. Currently available only for only select users, Airtel is offering free unlimited Local+STD calls along with 28GB of data with a validity of 28 days. This 28GB of 3G/4G data is divided into 500MB for every day and 500MB per night. Another plan which Airtel is offering is for Rs 549 which offers similar benefits except that the daily cap is now 1GB irrespective of if use it in day or night. Also, if you are lucky enough to get this offer and subscribe before 31st March 2017, Airtel will then offer this plan for the next one year (12 months)

Meanwhile, for the postpaid users, Airtel is planning to give away free 3G/4G data starting 13th March. The telecom operator hasn’t revealed any information, as of now, but each Airtel postpaid user will get to know the amount of free mobile data through MyAirtel app.
Coming back to the prepaid pack, to find if the plan is available for you. To do so, head on to Google Play Store and download the MyAirtel app. After logging in, you will see the offer listed under the heading ‘Just For You’ or navigate to ‘MORE PLANS’ under Quick Recharges menu and search for the plans under ‘Best Offers for You’.

Vodafone has also been one of the crucial telecom players in India and with recent talks of a possible merger with Idea Cellular, Vodafone might play even big in the coming future. Interestingly, Vodafone has also rolled out a similar plan to counter Reliance Jio Prime. The Telecom operator is offering 28GB of mobile data with a daily limit of 1GB along with free unlimited calls. Not only this, first-time subscribers to this plan get double the benefit for double the number of days. In other words, a first time user will get 56GB of data (1GB daily cap) with unlimited free calls for 56 days.

Vodafone hasn’t gone public and revealed this pack, instead, the company is sending in an official statement that reads – “Vodafone customers are diverse as are their wants. To satisfy these diverse needs and wants, Vodafone offers various segmented propositions. This is one such segmented offering and the offer is valid only until 15 March.”

Unfortunately, there has been nothing much attractive for Postpaid users, as of now.

Lastly, Idea is still considered one of the most prominent telecom operators in some select regions of the country. And just like Airtel and Vodafone, Idea is also pushing out a new Rs 348 pack which offers 14GB of data with a daily cap of Rs 500 MB along with unlimited free calls. Further, Idea is also not publically selling this pack in the market. Instead, you might ask Idea executives or check for the same on MyIdea app.

Which offer isfor you?

Reliance Jio is apparently the cheapest of them all, but, struggles when it comes to network connectivity and call connections. Not only this, you also will need to pay Rs 99 as the subscription fees. Meanwhile, Airtel is offering the similar plan for the second best price, however, the daily cap of 500MB (for both day and night) might be a deal breaker for some. However, Airtel is giving away an option to make this plan valid for another one year.

Coming to Vodafone, we get the same 1GB daily cap but we are not sure if Vodafone will be extending the validity of this offer. Lastly, Idea Cellular is offering probably the least attractive of them all coming in with a daily cap of 500MB and 14GB of monthly data. So should you subscribe to Reliance Jio? Or stick to your respective telecom operator? Well, Jio still hasn’t grown up to become our primary network so we would recommend you still go for either of Airtel or Vodafone if the benefits and network connectivity of both these operators coincide with your likings.