Reliance Jio Prime is impressive: What has Airtel, Vodafone and Idea in store? 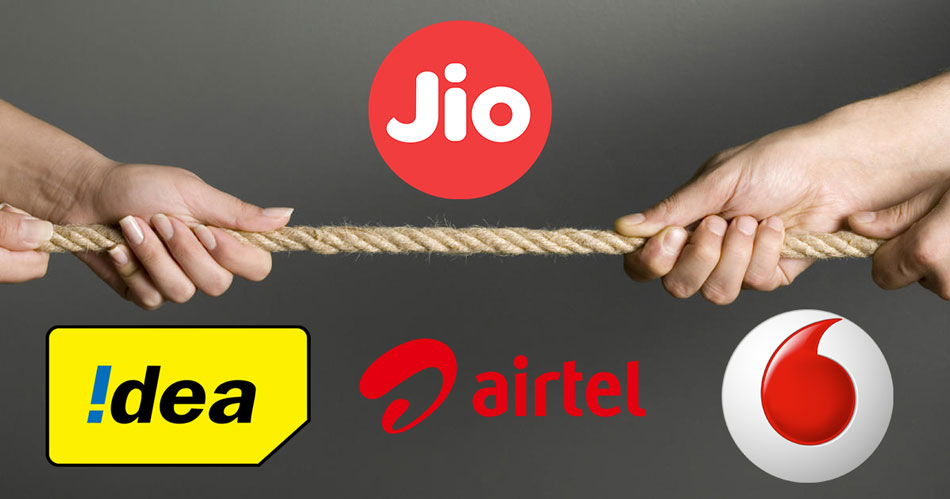 If we go by current prepaid and postpaid plans, none of the above mentioned operators come even close to what Reliance Jio will offer starting 1st April under its Prime membership. So how can they, perhaps, sustain Reliance Jio disruption.

In an event in Mumbai day before yesterday, Mukesh Ambani introduced Reliance Jio Prime membership in which users will continue to enjoy all the services under the current Happy New Year offer. To subscribe for Jio Prime, the existing Jio users or the ones who subscribe to Jio before or on 31st March 2017 are required to pay Rs 99 as an entry fee. Further, starting 1st April 2017, these users will then have to pay just Rs 303 per month to avail free unlimited calls, SMS and 1GB internet per day. In other words, one can then avail 30GB of data for just Rs 303 for one month. Also, Jio users will still continue to enjoy free 4G internet from 2AM to 5AM at night. Ignoring the fact that Reliance Jio has been providing its services for free from last 6 months, 30GB of 4G internet for Rs 303 along with free calls and SMS looks to be a deal worth while. So what do other telecom operators such as Airtel, Vodafone and Idea Cellular has in store to fight Jio Prime. Let’s break that down.

Bharti Airtel
Bharti Airtel still leads in terms of user base and is also the best when we talk about network and connectivity. However, current offers from Airtel for unlimited calls and internet are as follows. For prepaid users, the cheapest offering for unlimited calls is Rs 345 through which one can get unlimited free local and STD calls to any network in India along with 1GB of 4G mobile data. If you are a non-Airtel user than you can avail an additional 3GB of 4G data if you subscribe before February 28th.

Meanwhile, for Postpaid users, one can purchase Rs 549 ‘myPlan Infinity’ with which you get 1GB of 3G data (additional 3GB data for 4G handset users) and unlimited local and STD calls in roaming and 100 SMS per day. Rs 799 myPlan Infinity will fetch you 3GB (additional 5GB for 4G users) of mobile data while rest of the offerings remain same. Moreover, Airtel recently updated its existing Rs 1,199 plan which now comes with unlimited outgoing calls while roaming along with 6GB of 3G data. 4G handsets users will get 10GB of 4G data. If we bump up the data limit to 30GB, one has to pay Rs 2,999 under this scheme. To compare, Reliance Jio users will get 30GB of data for just Rs 303 per month. However, the validity terms for the Airtel plans might vary and there will be no daily limit for data consumption as well.

Vodafone
Vodafone has also been one of the crucial telecom players in India and with recent talks of possible merger with Idea Cellular, Vodafone might play even big in the coming future. For Vodafone users, the cheapest plan to avail free unlimited voice calling is for Rs 149 which will also fetch you 300 MB of 4G data. However, not that this plan only lets you call for free from Vodafone to Vodafone. Apart from this, one can avail Rs 344 pack through which, you can get unlimited calls to any network, in roaming along with 300MB of mobile data (1GB if you own a 4G smartphone).

Meanwhile, for Postpaid users, Vodafone recently updated its Vodafone Red postpaid plans. The cheapest in the basket is for Rs 499 which will give you unlimited national and local calls to any network, coupled with 3GB of 3G/4G data or 1GB data if you happen to own a non-4G smartphone and 100 SMS per day. However, this is nowhere near to what Reliance Jio will offer. To touch the maximum extreme in Vodafone Red plans, you can purchase Rs 1,299 plan which will offer unlimited calls on both home and roaming network (both incoming and outgoing) paired with 100 SMS and 12GB 3G/4G data for 4G smartphone users and 8GB for non-4G smartphones.

For prepaid users, Idea has a bunch of options in store for existing customers. For Rs 499 plan, customers will get unlimited local, national and incoming roaming calls with along with 3GB of 4G data if you have a 4G handset. For non-4G handset users will get the calling benefits but will have settle with only 1GB of free data. Another plan priced at Rs 999 plan offers unlimited local, national and roaming calls with 8GB free Data on 4G Handsets; and 5GB Data for non-4G handsets. Additionally, Idea will also provide a free subscription to its Music and Movies pack on these plans. There is also a Rs 1,599 plan which offers 10GB of 4G data apart from free calls and SMS.

How can these telecom operators can counter Reliance Jio?
If we go by current prepaid and postpaid plans, none of the above mentioned operators come even close to what Reliance Jio will offer starting 1st April under its Prime membership. So how can they, perhaps, sustain Reliance Jio disruption. Well, we expect that these telecom operator will come out with some attractive plans for both postpaid and prepaid users in future. The initial wave is apparently witnessed from Airtel’s special offers though which one can avail free unlimited calls and 2GB of mobile data for just Rs 299. We are also witnessing similar internet plans from Vodafone and Idea as well. On the other side, Reliance Jio may be growing significantly in terms of user base, but, still needs to work on reliability factor. A lot of current Jio users happen to to use it as their secondary SIM which is where operators like Airtel, Vodafone and Idea Cellular grabs the spot. Reliance Jio has all the potential to be the top telecom operator in the coming future, only if it improves on the call drops and reliability.