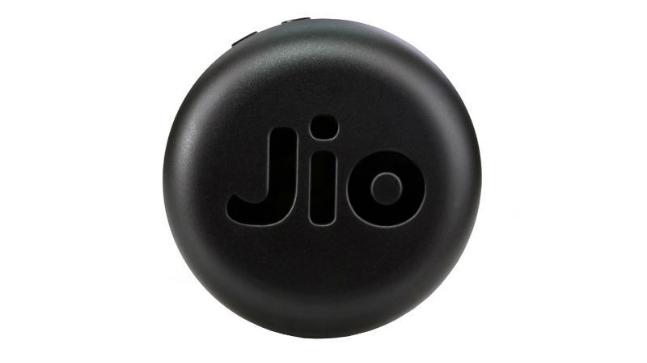 Indian telecom giant Reliance Jio has announced a new member to its JioFi lineup with the release of its latest JioFi 4G LTE (JioFi JMR815) hotspot which is priced at Rs 999. It will be able to offer data downloads to up to 150Mbps with upload speeds as high as 50 Mbps. The device is currently available exclusively through Flipkart with a one-year warranty to go with it.

The latest JioFi hotspot device comes in black and adapts a more circular look in contrast to the oval-shaped design of its predecessor with two physical buttons for power on/off and WPS(WiFi Protected Setup). The device can handle up to 32 connections at once of which one will include connecting through USB.

Powered by an ALT3800 processor, the JioFi JMR815 displays several notification lights for indicating its strength, battery levels and whether the 4G mode is enabled. The device can also be used as portable storage if a microSD card of up to 64GB is installed. While data speeds would be a significant change, users will still need the Jio 4G Voice App on their smartphones to make HD voice and video calls.

The JioFi hotspot now supports TDD-Band 40, FDD-Band 3 and Band 5 and carries the “Designed in India” label to convince Indians users to buy the same. The portable hotspot device gets its juice from a 3,000mAh battery which is expected to last up to 3.5 hours on a single charge cycle.

When bought through Flipkart, the JioFi JMR815 is bundled with a couple of exciting offers including a no-cost EMI for customers purchasing the device using an HDFC Bank credit/debit card. Axis Bank users will be able to redeem a 5 percent discount on the price on every purchase.