Redmi 9 will be powered by a MediaTek Helio G80 processor.

Redmi 9 has now been spotted listed in the RF exposure section of the Xiaomi India website. The listing reveals the model number M2004J19G and Head SAR of 0.711 W/kg and Body SAR of 1.059 W/kg of the device. Apart from this, no other details on the specs have surfaced on the RF exposure page. 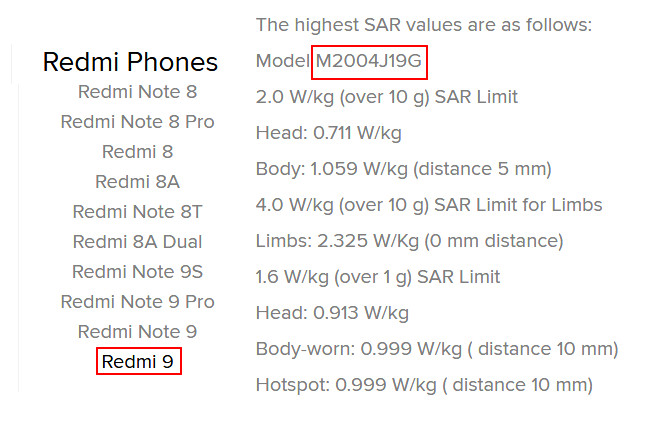 As per rumours, Redmi 9 will be powered by a MediaTek Helio G80 processor. It is said to come with a quad-camera setup. The setup comes with a combination of 13-megapixel primary lens, 8-megapixel wide-angle sensor, a 5-megapixel macro lens and a 2-megapixel depth sensor. The smartphone will be available in two colour options including Purple and Green.

Redmi 9 will come with a rear-mounted fingerprint scanner, similar to the Redmi Note 9. It will reportedly feature a 6.6-inch DoT notch display along with up to 4GB of RAM and 64GB of internal storage that may be further expandable. The smartphone might come with 5000mAh battery and USB Type-C port.