Realme X50 5G will be launching in China on January 7. Now ahead of the launch, the phone with model number RMX2051 has been spotted on the Geekbench benchmarking website. The listing has revealed quite a few specifications of the upcoming smartphone which are inline with earlier leaks. 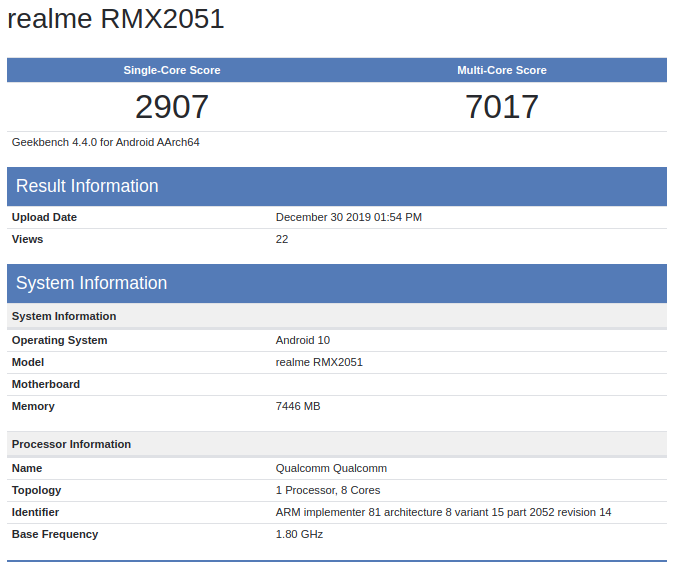 As per the GeekBench listing, the Realme X50 5G smartphone will be powered by a 1.80GHz octa-core Snapdragon 765G processor. In addition to the chipset, the Geekbench listing also confirms that the smartphone will feature 8GB of RAM.

For the software, the Realme X50 5G will run Android 10 out of the box. The benchmark results revealed the phone scored 2907 points in the single-core test and 7017 points in the multi-core test.

Realme X50 will feature a 6.67-inch Full HD+ IPS LCD display made by JDI with a screen resolution of 2400 x 1080 pixels and Corning Gorilla Glass 5 protection. The smartphone is confirmed to be powered by a Qualcomm Snapdragon 765G processor. It will be available with up to 8GB of RAM and up to 256GB of internal storage. The phone will come loaded with a 4,500mAh battery with 30W fast charging support. On the connectivity front, it will support 5G, WiFi, Bluetooth 5.0, GPS, 3.5mm jack and USB Type-C port. The phone is 8.7mm thick and weighs 185 grams.