The company has also introduced a Realme powerbank that comes with a new micro-strips surface that comes with 18W two-way Quick Charge along with indicator light and power button. It is loaded with a two-in-one charging cable and it can charge AIoT devices via low-current mode. It comes with a 10,000mAh battery high-density of battery. It features 13 layer of circuit protection,

The company has also announced the launch of Realme Watch in India. The smartwatch comes with a host of interesting features. To start with, the Realme Watch comes with a larger 1.4-inch touch screen with 323ppi pixel density, 320 x 320-pixel resolution and 380nits brightness. The screen is protected with Corning Gorilla Glass 3 protection.

It is loaded with an industry-leading PPG sensor.  It also features 14 sports modes including Cricket, outdoor cycle, strength training, Yoga, Basketball, badminton, Elliptical and more. The smartwatch is loaded with a real-time sleep tracker, drinking reminder, sleep monitor and more. The smartwatch can be synced to a smartphone via the Realme Link application. It features smart notifications from popular third-party apps. It features Smart Unlock, Music and Camera Control. The smartwatch will be the centre device for IoT devices from the company.

The smartwatch is loaded with IP68 certification making it water and dust resistance. The company claims that it has gone through various industry tests including 100,000 times button test, 3000 times wear test, 3000 times bend test and 7kg tension resistance test. 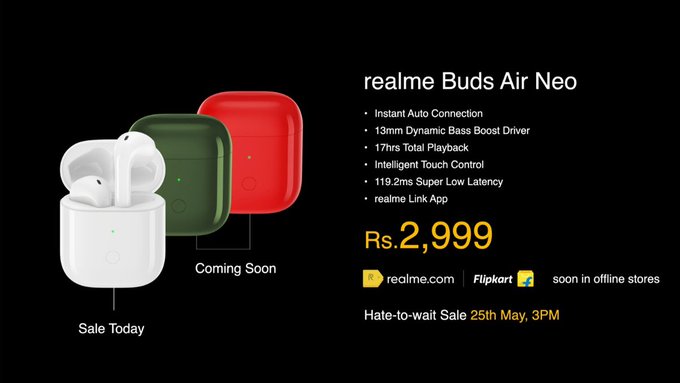 Mi True Wireless Earphones 2 vs Realme Buds Air: Which one is worth your money?