Realme has announced a new smartphone in China called the Realme Q5i. 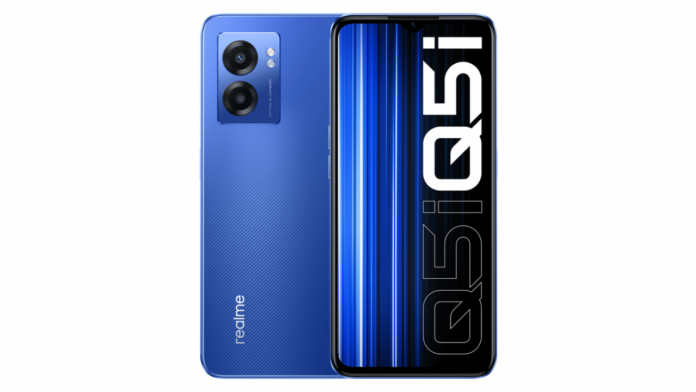 Realme is all set to unveil the Q5 and the Q5 Pro in China on April 20 but ahead of the launch, the first member of the Q5 series seems to have arrived already and its the Realme Q5i. The Q5i comes with a 90Hz display and is powered by a MediaTek Dimensity 810 SoC under the hood.

Realme Q5i sports a 6.58-inch FHD+ IPS LCD display with a 90Hz refresh rate, a 180Hz touch sampling rate, 600 nits of peak brightness and a punch-hole cutout for the selfie snapper. The handset is powered by the MediaTek Dimensity 810 chipset paired with up to 6GB RAM and 128GB storage that is further expandable via a microSD card. The phone runs on Android 12 with Realme UI 3.0 skin on top.

As for the optics, the Q5i has dual cameras on the back, including a 13MP primary sensor and a 2MP depth sensor. It has a 8MP camera on the front for selfies and video calls. The device has a side-mounted fingerprint sensor for security.

Connectivity options include 5G, dual 4G LTE, Wi-Fi 5, Bluetooth, GPS, NFC, and a USB Type-C port for charging. The Realme Q5i is backed by a 5000mAh battery that comes with support for 33W fast charging.

In related news to Realme, it is gearing up to launch the Buds Q2s in India on April 29 alongside the Realme GT Neo 3. The Realme Buds Q2s sport a transparent design. In addition, they connect via Bluetooth 5.2 and offer up to 10m range.