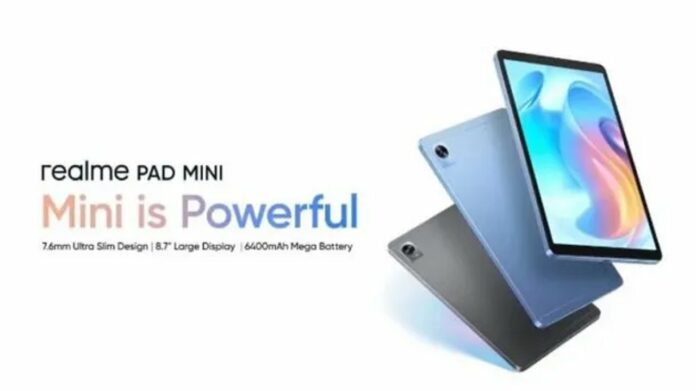 Realme Pad Mini tablet will be launched in the country on April 29. Alongside, the company will also launch Realme Buds Q2s true wireless earbuds in India. Realme has already confimred to launch the Realme GT Neo 3 smartphone and two new smart TVs under the Realme Smart TV X series.

Realme Pad Mini and Realme Buds Q2s will be launched next week in the country at 12:30 PM in India. The event will be streamed on YouTube as well. They will be made available on Flipkart and the official website of Realme in early May. Let’s take a look at their features.

The Realme Pad Mini sports an 8.7-inch HD display with a resolution of 1340×800 and a screen-to-body ratio of 84.59 percent. Further, the side bezels are thin, but the top and bottom of the tablet are slightly thicker.

Moving on, the tablet is powered by the Unisoc T616 chipset, a 12 nm chipset with Mali-G57 GPU. Further, the chipset is coupled with 3/4GB of RAM and 32/64 GB of in-built storage. The storage is expandable via microSD card up to 1TB.

In addition, the tablet is backed by a 6,400mAh battery and will support 18W fast charging with reverse charging. It runs Android 11 with realme UI for Pad.

The device sports a slim profile of 7.6mm and weigh 372 grams. It measures 211.8×124.5×7.6mm. For the optics, the front side has a 5-megapixel camera for selfies and video calls with an f/2.2 lens. Additionally, its rear side will feature an 8-megapixel shooter.