Realme Pad leaked renders show that the tablet will come with a 10.4-inch display. It may come with a stylus and will have a quad speaker system. 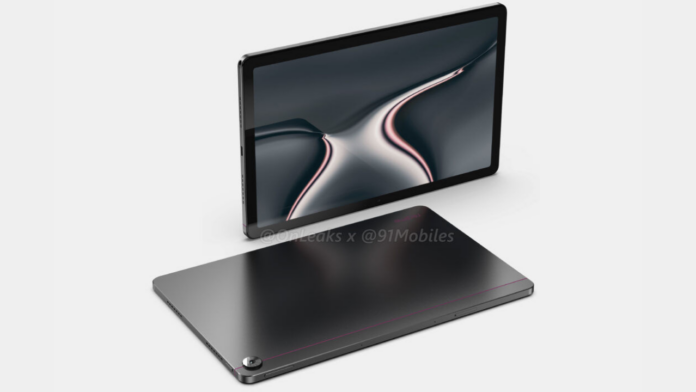 The Realme Pad launch is still out of sight but now, we do have some leaked renders. The Realme Pad has been officially confirmed by the company, though, there’s no word on when and in which regions the tablet will arrive first.

However, what we do have are official-looking renders of the Realme Pad. Courtesy of 91Mobiles in collaboration with tipster Steve Hemmerstoffer, the Realme Pad renders show off the tablet from all angles. The design of the tablet lies along the same lines as the iPad from 2020. It can be seen having flat sides along with a straight line on the back to facilitate the “dual tone” finish.

A single selfie shooter sits in the middle. There’s uniformity in the thickness of bezels all around the screen. The Realme Pad renders also reveal a quad speaker setup along with a Type-C port on one side for charging. There is a power button close to the camera module along with a MicroSD card slot for storage expansion.

There’s also a slot which is housing a USB port where the Stylus will reside which will come shipped with the Realme Pad. There’s a 10.4-inch screen on the front while the tablet itself measures 246.1 x 155.8 x 6.8mm (excluding camera module bump). The tablet is seen in a grey-black colour scheme while more options should be available at the time of launch.

A recent certification listing for the Realme Pad revealed it could come equipped with a 7,100mAh battery cell. The device could be arriving this quarter or at the beginning of October. Again, an official announcement regarding the release is yet to be made. Realme will also be launching the Realme Book alongside the tablet. The design, price and specifications for this laptop have also been leaked in the past.