Realme has launched a bunch of MagDart Wireless Magnetic Chargers as well as accessories. The 15W MagDart charger comes with a kick-stand as well 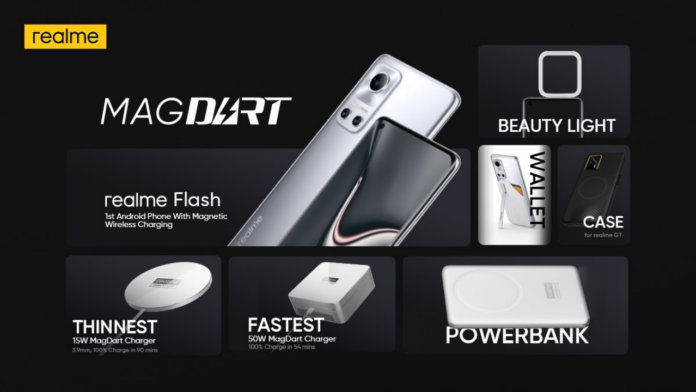 Realme has unveiled Apple’s competition when it comes to wireless chargers. The new Realme MagDart Magnetic Wireless Chargers bring magnetic wireless charging to Android. However, Realme’s tech is superior to Apple’s MagSafe as it outputs much higher charging speeds, including up to 50W.

The whole ecosystem of magnetic chargers include a 50W MagDart Wireless Charger, a 15W MagDart Charger, and a MagDart Power Bank. Other accessories include MagDart Beauty Light, MagDart Wallet, and MagDart case specifically for the Realme GT.

Realme hasn’t announced the availability and prices of the products as of yet. The company is expected to make an announcement regarding the same in the near future.

First up is the Realme 15W MagDart Charger which looks similar to the puck-like look of Apple’s MagSafe charger. But Realme’s charger is much thinner with only 3.9mm of thickness. The puck comes with a non-removable case. Realme claims that MagDart can fully charge an Android phone with a 4,500 mAh battery in 90 minutes.

The Realme 50W MagDart Wireless Charger comes with vents on the back and the sides for the fan inside to dissipate the heat. It has a cuboidal form factor with a USB-C port on one of the sides. It comes with 1.5mm magnets and as the name suggests, is capable of delivering up to 50 watts of wireless power. The 50W charger can charge a 4500mAh battery within 60 minutes.

The 50W wireless charger was demoed using the Realme Flash, which is a concept phone from the brand and isn’t available to the public. It is claimed to be the first Android smartphone to support magnetic wireless charging.

That’s not the end of it. Realme has three more accessories including a MagDart Beauty Light. This one is a magnetic attachment that comes with a flip-up light ‘ring’ that has 60 LEDs. It works just by snapping onto the phone. The light ring draws power from the phone itself via reverse wireless charging.

There’s a MagDart Wallet that is made attractive with hard-wearing white vegan leather. It can hold up to three cards. This one again uses magnets to snap on to the back of the phone. It is similar to Apple’s MagSafe Wallet, but in addition, it also has a kick-stand built-in.

And finally, another MagDart Case has been launched for the Realme GT. While the phone doesn’t have native wireless charging, the case enables the same, specifically via magnetic wireless charging.