Realme GT Neo 3 launch has been confirmed for China along with the rear design that will have a triple camera module. 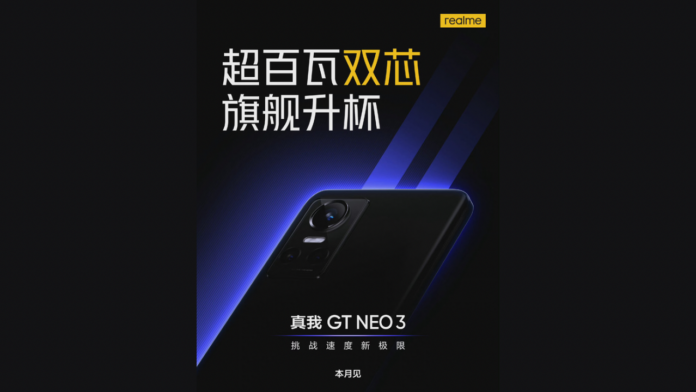 A new Realme GT series device was being rumoured to arrive soon and a confirmation from Realme China’s CMO reveals that it will indeed be the Realme GT Neo 3 that will launch this month. The device has already appeared on TENAA in the past which confirmed a bunch of its specifications and now, the rear design of the GT Neo 3 is also out in the wild, ahead of the launch.

Realme China CMO Xui Qi rolled out a new poster through his Weibo handle which reveals the camera module of the Realme GT Neo 3. The poster confirms that the device will have triple cameras out of which the primary sensor is at the top. Moreover, it will have support for OIS as well.

The TENAA listing says that the primary sensor will be a 50-megapixel lens while the other two should include 8MP ultra-wide camera, and a 2MP macro camera. The front of the smartphone is yet to be revealed. As for other specs, the GT Neo 3 is confirmed to come with a Dimensity 8100 SoC and is supposed to come with two battery options.

The device should boot Android 12 based Realme UI 3.0 out of the box. Lastly, it will have an in-display fingerprint sensor for security. The device has already been tipped to launch in India once before as the Realme GT Neo 3 moniker was spotted in the source code of the Realme India website.