Realme C31 and the Oppo A16e are playing in the same territory but which one’s a better choice? 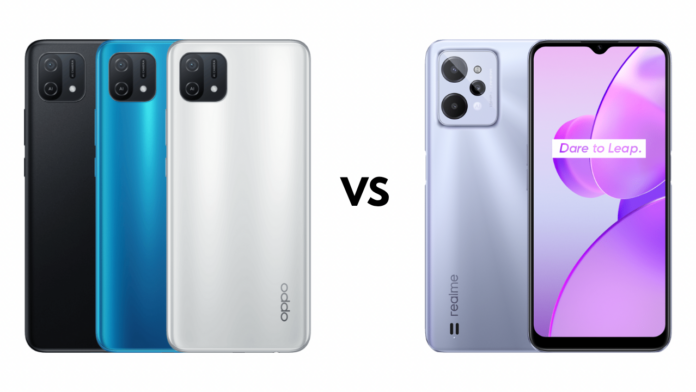 The Realme C31 is equipped with a 6.5-inch HD+ (720×1,600 pixels) LCD display with a screen-to-body ratio of 88.7 percent, 60Hz refresh rate and a 120Hz touch sampling rate. Now, a higher touch sampling rate means the display will register your touch faster for a quicker reaction.

While Oppo A16e’ 60Hz touch sampling rate, might not be noticeable in daily usage, its higher screen to body ratio will be. Other features of the display are identical to each other. However, colour calibration will also play an important role. But as far as numbers are concerned, the Realme C31 wins the round.

However, the Realme C31 wins in this segment once again because of a faster processor and a faster storage module. Both of these will help the C31 run more efficiently in day to day usage with quicker app installs and launches.

The Realme C31 packs a 5,000mAh battery which is claimed to offer up to 45 days of battery life on standby, according to the company. It can charge at 10W of speed via USB-C. On the other hand, the Oppo A16e has a 4230mAh battery and it charges via a Micro-USB port. The charging speed hasn’t been revealed by Oppo.

The Realme C31 again wins the round with a bigger battery capacity. Moreover, it charges via USB-C which is now the widely accepted charging standard and not Micro-USB. Further, we can assume that the Realme C31 also charges at higher speeds than Oppo A16e.

The rear camera module of the Oppo A16e houses a single 13-megapixel primary camera along with an LED flash. For selfies and video calls, the OPPO A16e features a 5-megapixel front-facing camera.

While we will have to test the cameras of both the devices simultaneously to declare which one performs better, we can say the Realme C31 is a better performer on the basis of on-paper specifications and the fact that it has more camera sensors, enabling dynamic shooting scenarios.

We would say that the Realme C31 is a better offering than the Oppo A16e in all aspects. It has a bigger battery, more camera sensors, faster storage and processor along with a slightly better display.