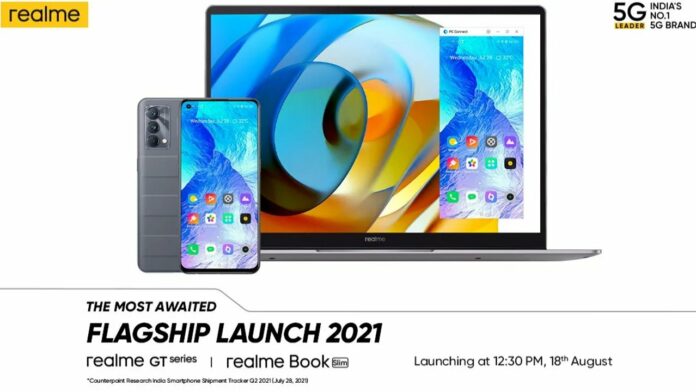 Realme Book Slim is launching in India on August 18 alongside the Realme GT and GT Master Edition phones. Now, ahead of next week’s launch, the company has teased the upcoming laptop will have a smartphone PC connect feature.

Realme has also shared a teaser image showcases the Realme GT Master Phone and Realme Book Slim. This connect feature will allow the user to connect their phone to the PC through Wi-Fi Direct. It will be similar to Huawei’s Share or Microsoft’s Your Phone that would let users control their smartphone from the PC and share files.

The feature, called PC Connect, will likely work between the soon to be announced Realme Book and a list of supported Realme smartphones. The software is expected to use Wi-Fi direct, meaning both the devices should be connected to the same network.

The laptop will come in two colour options in India – silver and blue. There will be connectivity options like a USB Type C port with Thunderbolt 4 support, two USB Type-A ports, and a standard headphones jack.

A recent leak from RealmeTimes revealed the key specifications of the upcoming laptop. Realme Book Slim will come with a 14-inch 2K display. It will have a screen resolution of 2160 x 1440 pixels and a peak brightness of 300 nits. Realme Book Slim leak also reveals that the display will also get the blue light certification for less blue light emission.

Furthermore, the laptop will be powered by the Intel Core i5-1135G7 mobile processors, paired with Intel Iris Xe graphics onboard. You should get 16GB of RAM and 512GB of PCIe SSD storage.

Connectivity options may include 1 x USB 3.2 Gen 1, 2 x USB C 3.1 port with support for PD and DP protocols, and 1 x 3.5mm headphone jack. There will be a fingerprint sensor for a secure login and a 54Wh battery. It will also support 65W fast charging. There will be a triple microphone setup and stereo Harmon Kardon tuned speakers.

For the pricing, the Realme Book Slim is said to be priced above Rs 55,000 in India.