Realme announces extended warranty on its smartphones during Coronavirus lockdown 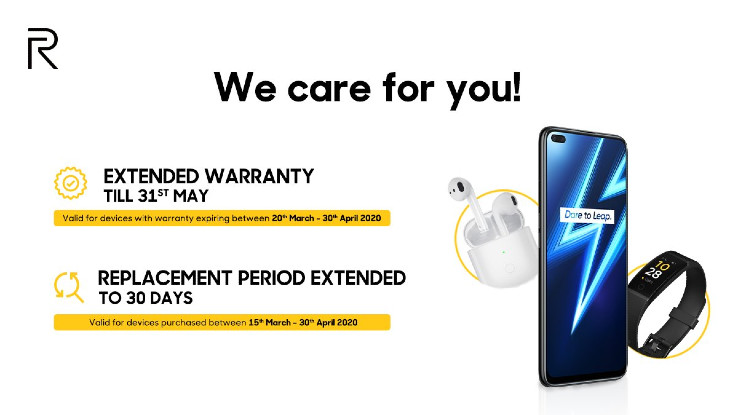 The brand has extended the warranty on all its products till May 31.

Realme has announced that is extending the warranty period on all its smartphones and accessories during the Coronavirus lockdown. The brand has extended the warranty on all its products till May 31.

Realme CEO Madhav Sheth revealed this information on his official Twitter handle. As per the company, it is offering extended warranty for those products whose warranty expires between March 20, 2020, to April 30, 2020. Users will get extended warranty till May 31.

Furthermore, it is also extending the replacement period to 30 days for those products, which were purchased between March 15 to March April 30, 2020. Realme has also revealed that its Make in India facility will be closed during the lockdown period as well. The brand has also announced that it is postponing the Realme Narzo launch event due to the lockdown and has advised its employees to work from home.

The smartphones were scheduled to launch on March 26 via an online event. The company has revealed that the smartphones will come gaming-centric chipsets along with 5000mAh battery with Quick charge support. The battery will deliver up to 39 days of standby time.