Realme 9 4G launching in India on April 7, key specs revealed ahead of launch

Realme 9 4G has now been confirmed to arrive with a 108-megapixel HM6 sensor. 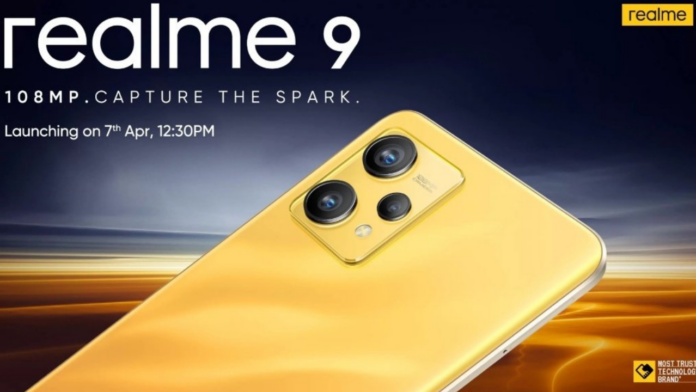 Realme is set to host a big launch event in India on April 7 which has now been confirmed to include the launch of Realme 9 4G. Alongside the handset, Realme will be launching the Realme GT 2 Pro, Realme Buds Air 3 TWS earbuds and a new Realme TV stick. The launch event has been confirmed to take place virtually, at 12:30 PM IST on the mentioned date. The key specs for the Realme 9 4G have also been revealed ahead of the launch.

The announcement was made via the Realme India twitter handle which confirms the launch date. Moreover, a Flipkart listing suggests that the device will come in three colour options including Gold, Black and White. It will sport a 90Hz Super AMOLED display with a 360Hz touch sampling rate, in-display fingerprint sensor, and 1000 nits of peak brightness.

The handset will come with the world’s first 108MP Samsung ISOCELL HM6 sensor, paired with a 4cm Macro camera and a 120-degree ultrawide angle sensor. The device will weigh 178 grams with 7.9mm of thickness. It will also come with a 3.5mm headphone jack. This listing also confirms that the smartphone will be sold exclusively via Flipkart.

A recent report regarding the Realme 9 4G said that the smartphone could cost less than Rs 15,000. The variants of the upcoming Realme handset were also leaked earlier. The leak suggests that device will come in two storage options – 6GB RAM + 128GB and 8GB RAM + 128GB.