A Flipkart teaser suggests that Realme will launch its first 4K Google TV Stick in India during the Big Billion Days 2021 sale, whenever it commences 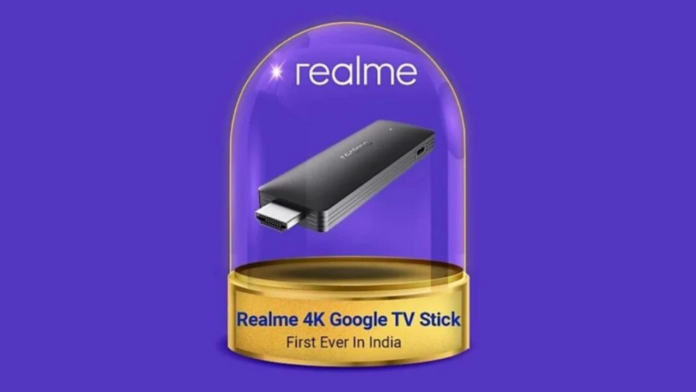 Realme entered the Smart TV segment in India last year, and the brand is apparently working on bringing a new 4K Google TV stick in the country. Apart from the device, we also know that the streaming device will be available via Flipkart for purchase.

The teaser poster for the stick arrived alongside the announcement of the Flipkart Big Billion Days 2021. This means that the Realme 4K Google TV Stick should be available to purchase once the Big Billion Days 2021 sale commences. However, there’s no date as to when the sale will begin.

It will have an HDMI port for connection with the TV. Further, the name suggests that the Realme 4K Google TV Stick will also be able to run 4K resolution content. It may also come with HDR support. Realme hasn’t started teasing the device via its accounts yet.

Talking about its recent launches, the brand has brought the Realme Pad in India, its first Android tablet. The LTE model of the tablet comes in 3GB+32GB and 4GB+64GB variants. They are priced at Rs 15,999 and Rs 17,999, respectively. The Wi-Fi only variant will cost you Rs 13,999 with 3GB RAM and 32GB internal storage. It comes in Grey and Beige colours.

Realme Pad sports a 10.4-inch display with 2000 x 1200 pixels resolution. Further, the display will come with a screen-to-body ratio of 82.5 percent. A MediaTek Helio G80 SoC powers the tablet under the hood. The chipset is paired with up to 4GB RAM and 64GB internal storage.