Oppo Watch: How similar is it to the Apple Watch?

The Oppo watch looks or what some might call a “clone” of the Apple Watch but costs way less. So what are the features that it shares with its doppelganger? Let’s find out!

On 6thMarch 2020, Oppo announced it’s first smartwatch, The Oppo Watch. The company claims it to be its strategic step into the field of IoT. The watch comes in two sizes I:e 41mm and 46mm.The 46mm version of OPPO Watch uses a 3D flexible hyperboloid display–an industry first for a smartwatch. The watches feature Oppo Dual-Chip Endurance System which switches between a Snapdragon and Apollo chip based on the battery level.

The company has also incorporated a fast charging technology called Watch VOOC Flash Charge which claims to increase battery life and reduce charging times. The watch runs on Oppo’s ColorOS Watch software which is based on Android.

The Oppo watch looks or what some might call a “clone” of the Apple Watch but costs way less. So what are the features that it shares with its doppelganger? Let’s find out! 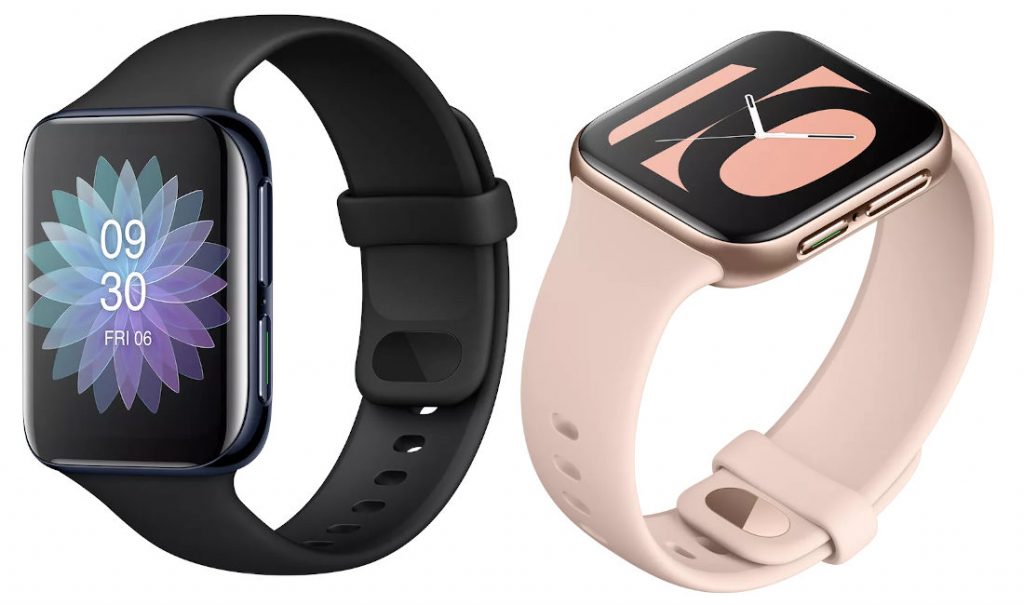 The design language of the Oppo watch is very similar to the Apple watch with thin bezels and an edge to edge screen with both featuring an OLED touch-sensitive panel, however the Apple Watch Series 5 features an always-on display. The Apple Watch comes in two sizes which are 44mm and 40mm with 1.73” and 1.57” display sizes respectively.

Both the watches have the ability to track a plethora of physical activities such as sleep, running, walking and with their water-resistant of up to 50 meters, even swimming. Both the watches have ceramic backs for maximum contact with the skin for measuring your heart rate using an optical-heart rate sensor and they also feature an ECG sensor which measures your heart’s electrical activity.

The Apple Watch comes with a cellular option where an eSIM is present inside the watch giving it the ability to be connected via cellular networks. The Oppo watch has an eSIM by default allowing phone-free connectivity at all times. Both the watches feature hardware button with the exception of the digital crown which is only present on the Apple Watch.

Both the watches feature their own App stores for installing apps right onto the watch. The watches come with a multitude of watch faces and have interchangeable straps that suit your mood and style.

The Apple Watch and the Oppo watch feature a lot of identical features but are not twins. So, which one should you get? If you are an Android user and want the premium look and feel of an Apple Watch without compromising on functionality, the Oppo Watch will not disappoint.

If you use an iPhone and what a smartwatch on the cheap, the Oppo Watch is a good choice but, if you want the best compatibility and integration and want to be deeply incorporated into the Apple ecosystem with the highest quality, The Apple Watch is the way to go.