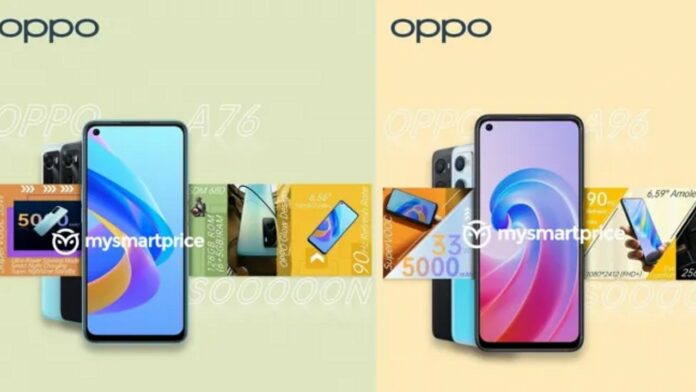 Oppo is going to launch two new smartphones from the A series – Oppo A96 4G and Oppo A76 4G in India soon. The Oppo A96 5G phone was launched in China in January. But the Indian market will get the 4G variant.

Tipster Abhishek Yadav has revealed the variants, prices, and launch dates of these phones in India. In addition, MySmartPrice has revealed a few specifications of the upcoming Oppo 4G phones.

Oppo A76 smartphone was announced in Malaysia in February this year. It features a 6.56-inch HD+ IPS LCD display with 1612 x 720 pixels resolution and a 90Hz refresh rate. The phone packs an octa-core Qualcomm Snapdragon 680 processor which is paired with 6GB RAM and 128GB storage.

The phone comes with a dual rear camera setup for photos and videos. It has a 13-megapixel primary sensor and a 2-megapixel depth sensor. For selfies and video calls, the device uses an 8-megapixel shooter.

As for software, the handset runs on Android 11-based ColorOS 11.1. There’s also a 5000mAh battery with 33W fast charging support. It includes a side-mounted fingerprint scanner for security. The phone also has face recognition as well. The phone supports dual-SIM, 4G, dual-band WiFi, Bluetooth 5.0, GPS, A-GPS, BeiDou, GLONASS on the connectivity front.

On the other hand, the Oppo A96 is said to sport a 6.59-inch AMOLED FHD+ display with a 90Hz refresh rate. The phone will likely pack Snapdragon 680 chipset. Lastly, it will have 5,000 mAh battery with support for 33W SuperVOOC.