The Nord Watch could be the upcoming pocket friendly smartwatch from OnePlus. 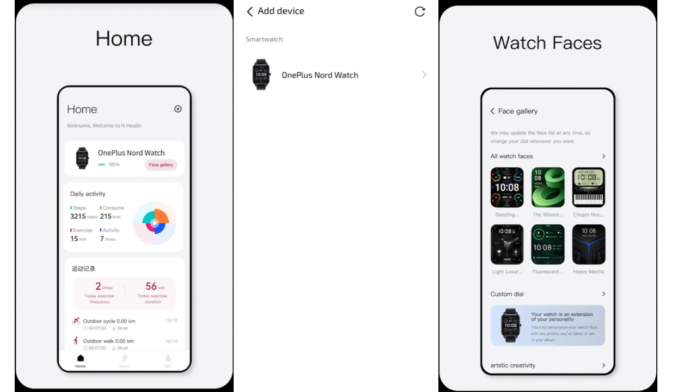 OnePlus entered into the smartwatch segment back in March of last year and since then, a new one from the company hasn’t arrived. However, the brand could be working on a new OnePlus Nord Watch that could launch soon and the first look for the watch has been revealed which suggests OnePlus could be deviating from the circular dial approach.

Tipster Mukul Sharma has tweeted the screenshots of the upcoming ’N Health’ app which is being developed exclusively for the Nord Watch. Further, from the screenshot, we can see that the Nord Watch has a rectangular dial instead of the circular dial which featured on the OnePlus Watch.

The watch appears to have a metal frame with a crown at the right. One can notice that there are six watch faces coming for the Nord Watch and there’s also a “Custom dial” feature, which will let you customize your watch face using photographs from a connected device.

Read More: OnePlus 10T 5G launching in India on August 3: Everything We Know So Far

Apart from that, the upcoming smartwatch from OnePlus will come with step counting feature and various sports modes such as outdoor cycling and outdoor walking. Additionally, the basic features of a smartwatch will all be present, including a SpO2 sensor, heart rate monitoring, and sleep tracking capabilities.

Back in June, the smartwatch was spotted on BIS certification website which confirmed the Indian launch. The Nord Watch could be a pocket-friendly smartwatch considering the Nord series devices have always been the budget lineup from the Chinese brand.